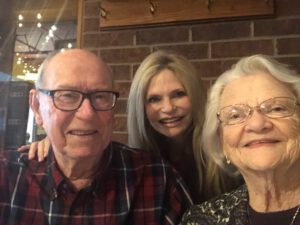 My mom and dad just celebrated their 68th wedding anniversary last Sunday, May 3. They are healthy and happy at 92 and 88 (almost 89) and when my husband and I decided to drive halfway across the country to join them for this momentous day, they welcomed us with open arms. They didn’t hesitate one second, even though we were coming from the supposed Coronavirus hotspot of Southern California, where we got stuck when the lockdown happened. Fortunately, part of the country started opening up May 1st, so we took a chance and got into our car. We took precautions, of course, but we did not withhold our hugs and kisses. And we enjoyed a wonderful celebration with extended family at a favorite restaurant.

The questions I’ve been asked more than once since we made our getaway and braved driving through five closed or partially opened states is: “Why would you risk doing that during this Covid-19 crisis? Why would your parents be OK with you physically joining them during this pandemic?” I decided to ask them when we got to their home. This is their story.

Both of my parents grew up as children of the Great Depression. Dad was born in 1928, Mom in 1931. They came from large families (six children each) and each grew up on farms. Their families struggled with the impact of an economically wounded nation, but being part of farm families did soften the impact on their families because they could grow their own food and were somewhat self-sufficient. Neither of them knew much about the suffering because news didn’t travel fast in the 1930s. My dad’s family didn’t even have a radio, so their only source of news came from when his father would go into town (once a week at best) and talk to other farmers. Mom’s father worked in town, but he was stoic and didn’t share much information with the family.

The Polio epidemic happened when they were kids so I asked how it impacted their lives. Mom said, “The polio scare hit our small town during one summer in the late thirties. I remember that caution was taken. We didn’t go to Sunday school or town for a short period of time. My friend’s parents, who lived in town, kept my friend and her siblings inside more than normal, but the community didn’t shut down.”

Dad added, “Polio usually hit in the summer and hit different places at different times, so every town had its own guidelines. I was mostly on the farm, though, so we didn’t know a lot of what was going on. None of my brothers or sisters ever got polio, so I guess we were fortunate.”

They both agreed that the spirit of the nation overall was “be aware, take steps you deem necessary to protect your families, but keep working.” The country had gone through an economic nightmare during the Depression and the American people were determined to keep going, no matter what.

World War II followed right behind and brought a lot of restrictions to U.S. citizens as it supported the war effort. Dad recalled, “There were shortages of everything from food to cars. Rationing put everyone in a bind and families received coupons that limited the amount of groceries and other supplies we could buy.” There were many sacrifices, but Mom and Dad both agreed that through it all the country kept strong and kept going. They say that’s what Americans do and I agree. 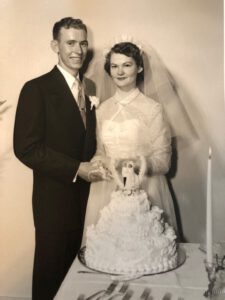 My folks have lived through the Great Depression, wars, recessions, famines, plagues, pandemics, the Oklahoma bombing, 9/11, hurricanes, tornadoes, floods, and numerous personal challenges and losses. They are tough, resilient, and are a shining example of true American spirit. They aren’t going to “cower” at this point in their lives. They never have lived in fear. They are wise and discerning. In reference to our current crises, of course they weighed information and took the time to listen to and read from many sources about what was going on with this new virus. They were savvy enough to go around some of the “major media” reporting to gather more medical research and scientific evidence that tells a clearer and fact-based story of what Covid-19 is versus what it’s not. They also trusted us and our judgement as responsible family members, who place the safety of our loved ones above all else. They knew we would choose wisely.

I asked them if they had ever experienced this level of government intervention that’s currently happening. Their response almost in unison was, “ We’ve never seen a national lockdown like this in our entire lives.”

They did say they believe Covid-19 is real and that in the beginning it was good to take precautionary actions. They knew what the country went through during the Spanish Flu epidemic of 1918, even though they weren’t born yet. Dad told me his mother’s brother had died from it when he was just 20 years old. They emphasized that medical science was not as advanced as it is today and that fact probably played a large part in the severity of the 1918 outbreak. However, now that hard scientific data and actual numbers are available for Covid-19, medical science is so advanced, and proven therapies have been discovered to manage this virus, they feel that keeping the economy crippled is now more dangerous than the threat of a virus that, although new, is proving to be less deadly and threatening than originally thought. They know what happens when the nation is economically broken and they question why many of the restrictions and lockdowns are still in place throughout much of the country. They feel fortunate they live in a state, Oklahoma, that is opening up and giving its economy the opportunity to start again. They are grateful for Oklahoma’s political leadership and feel that overall their lives have not been extremely impacted and they know they are fortunate.

The biggest disappointment they’ve had, though, is not being able to go to church, which is an important part of their lives. They have a hard time understanding why churches are not deemed “essential businesses” and have had to close, while hardware stores and liquor stores are “essential” and have been allowed to stay open. When asked what their biggest fear is as the country moves forward, my dad said without hesitation, “I fear our grandchildren and great-grandchildren will have to someday live in a socialistic or even more extreme restrictive environment.” They pray their children, grandchildren, great grandchildren, and generations beyond will have the right to live free, constitutionally protected, independent lives and be able to live in faith over fear, always.

Mom and Dad have gone through a number of national challenges, many worse than this Covid-19 “pandemic” is turning out to be. Most importantly, they cherish the right to choose how to handle their own health and make their own decisions on how to navigate challenges like this. They would rather spend what time they have left surrounded by family. That’s what is most important to them.  They are amazing examples of what truly being an American is all about, which is living free, living in faith, and living with choice.

So, to answer the question posed in the beginning of this article, this is why they embraced us joining them for their 68th anniversary, and this is why we did so. 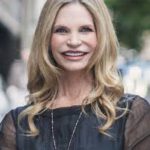 Cynthia Blanchard is co-founder and president of Anthem Holdings, the parent company of Anthem Vault, AnthemGold, and Hera Software Development. She previously owned and operated Harry Max Publishing. She has contributed background vocals on numerous country music albums, including Reba McIntyre and Mindy McCready, and has performed at the Grand Ole Opry. She is the author of Humanville, a spiritual fable that focuses on helping individuals with eating disorders.

Previous StoryWhy You Should NOT Stay Home
Next StoryDid We Just Break The World?