We need to start thinking much bigger.  The world has presented us with the best opportunity we have ever had to really advance the causes of freedom, peace and civility.  People are increasingly weary of the status quo and the endless struggle of groups wanting to coerce each other towards often worthy goals.  They want change, but they fail to identify the cause of their suffering so they focus on treating symptoms.  We must seize this rare opportunity.

Now, more than ever, everyone can see how the world has become smaller.  We are all neighbors.  The Corona Virus originated in China but now affects us all. There will soon be more ways for smaller numbers of people to aggress on others globally.  Nanotechnology, artificial intelligence, genetically modified humans and many other known and yet unknown technologies will soon be realized.

We now permanently live in a global community.  Traditional nation state terrestrial borders are becoming less relevant.  Reasonable people of the world urgently need to unite around the idea that aggression is wrong.

Thus far, we have not been successful in convincing enough people of this  simple, obvious and effective idea.  This is our fault.  Rather than endlessly arguing about how best to implement this simple idea, we need to focus our attention and efforts on most effectively presenting the concept to other reasonable people.  Without first winning agreement on the basic principle, arguing about anything else is a waste of time.  This is exactly what the new Live and Let Live Movement is about, and I urge you to join.  Details can be found at www.liveandletlive.org.

It is time to start a global movement based on a mutually beneficial fundamental principle that applies to all competent adults equally regardless of race, sex, national origin, wealth, sexual preference, religious views or lack thereof, or even one’s own personal goals.  If we truly believe all people ought to have equal rights, we need a movement that has such a principle as the anchor of its philosophy.

We should readily admit that peaceful competent adults hold different moral views and values.  They have different goals for their lives.  Competent adults often define their happiness differently.  Let’s embrace the differences.  Indeed, values such as freedom, equality under law, tolerance, open mindedness, voluntary kindness, rational thought, honesty, civility and a commitment to pursuing truth are most responsible for increasing human happiness worldwide. 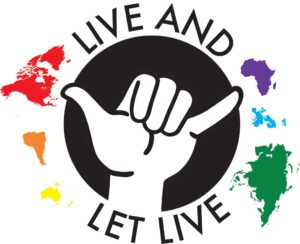 A free society requires the proper balance between the rights of one person to do whatever they want with their property with the equally important rights of others not to be disturbed in their affairs by the activities of other people.  This is the essence of a free society.  Therefore, people adhering to the 3LP agree that the initiation of force, fraud, or coercion is wrong in all cases.  It remains wrong even if the initiation of force, fraud, or coercion is employed to accomplish desirable results.

Further, it isn’t only the actual initiation of either force, fraud, or coercion that violates the rights of others.  The substantial threat of such an initiation also violates another’s rights.  It is for this same reason that we recognize a justified act of self-defense even before an actual use of unjustified force.  That we do no t always agree on exactly which particular circumstances allow a justified act of self-defense does not mean we fail to recognize the principle that one need not wait until another’s fist hits their face before such person can legally and properly act to prevent the trespass.

Like any principle, reasonable minds can and do disagree about the proper implementation of the 3LP.  For this reason, implementation of difficult issues is best left to individual local communities to experiment with in the competitive laboratories of competing free communities.  Like self-defense, despite good faith differences in implementation, the 3LP remains valid.  Accepting the 3LP is the first step towards moving in the direction of a free, peaceful and virtuous society and world.

A virtuous society cannot effectively be mandated or legislated.  We must persuade our fellow humans to be enlightened and virtuous.  Parents, and not the government, must be on the front lines of teaching the next generation how to act towards others while living on the planet.  We urgently need to help each other to be better and more effective parents.

The 3LM does not take any particular position with regard to government except that whatever actions it pursues should be entirely consistent with the 3LP.  We welcome Anarcho-Capitalists, Minimalists, Libertarians, Republicans, Democrats, Democratic-Socialists, Green Party Members, Christians, Muslims, Jews, Atheists, and all others into our Movement so long as they truly accept the 3LP.  All peaceful moral views are welcome and respected.

We must recognize that in order for you to live the life you want in peace and freedom you must extend that same right to your neighbor.  Your right to pursue your life as you choose cannot infringe upon another’s to do the same.  If we all adhere to this simple truth, we can live in free and prosperous society where human happiness is maximized and suffering is minimized.   It is that simple.  We must oppose all forms of aggression if we are ever to achieve a peaceful world.

I challenge you to seriously envision a world where all laws are consistent with the Live and Let Live Principle (“3LP”).  What matters most is the nature of the laws that are enforced.  To the extent the laws are consistent with the 3LP, is the critically important issue.  Who is enforcing the laws is of no consequence so long as they are enforced reasonably and with due process.  As such, the Live and Let Live Movement is mostly about advocating for 3LP compatible legal rules at all levels of society.  More specific moral opinions ought to remain in the domain of persuasion rather than law.

Several annual international conferences are currently being organized to help promote the Movement.  An annual International Live and Let Live Day is contemplated to help bring attention to the Movement.  A Constitutional Amendment has been drafted to help facilitate a shift in laws to a more 3LP compatible society.  The Movement is in need of energetic activists to both spread the word as well as to actually win hearts and minds.  I invite you to join the Movement and let’s change the world together.  The Movement officially launches in October of 2021 with a conference in Honolulu, Hawaii.

Editor’s Note: The Live and Let Live Principle will be presented at FreedomFest, “the world’s largest gathering of free minds,” July 21 – 24 at FreedomFest 2021 in South Dakota. Now more than ever, we need 3LP to bring peace into the world.

Previous StoryGandhi Was Right…the Change Has to Start with Us!
Next StoryHow Extremists Took over the Duopoly — And What To Do about It