Ask yourself these three questions, “Who are you?” “Do you have a social security number?” “What do you own?”

The thing people generally call the “United States Government” doesn’t come close to honoring the Constitution or the Constitutional Republic it formed; thus, in this article, I call that thing: “Corp. U.S.” (to see more on why, see: Corp. U.S. Myth 1).

To resolve their 1933 bankruptcy,
Corp. U.S. needed a new source for funding—enter: the Social Security Act of 1935. Notice the first paragraph of the Act:

A primary purpose of the Act was “to raise revenue”.

Now notice what happened as the Social Security program was implemented.

The SSA uses information from Form SS-5 applications to “create a name and number”, which the SSA registers (to record their ownership), in a database of cardholders.  The SSA then prints said name and number on a pre-printed social security card (hereinafter: “SSC”) and sends a package, including the new SSC, to its recipient cardholder.

Now, look at the back of such a Social Security card: 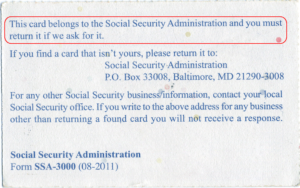 Notice, the first paragraph clearly reserves the SSC’s ownership as property of Corp. U.S.—not the cardholder!

The law, under which the SSC was created clarifies—the SSC, the name on the SSC and the social security number (hereinafter “SSN”) are all property of Corp. U.S., through its agent, the SSA—there are no exceptions!

Yet, the prevailing nature of that myth is the single largest cause of virtually every problem we face in America today. Thus, we call it: “Prevailing Mythology.”

However, if you fall prey to the Mythology and think the SSC is “your card” and the SSN is “your number”, you’ll ignore the facts and nature of both the cardholder relationship and who you are.

Thus, the recipient can only lawfully accept Corp. U.S.’ SSC in trust and the cardholder is born.

The recipient is instructed to sign the card; and hold it in a safe place until such time as its owner (Corp. U.S.) wants it back.  The SSC is not transferable and the SSC cannot be used in any unlawful way.

The D.C. Trust Act defines that process as the creation of a: Revocable Trust (see: CTCS 101).

Further, due both to SSA reserving the right to terminate the trust and Congress retaining direct control over beneficiary distributions (via FICA, etc.) the law defines the cardholder as an: “agency trust”.

In publications the Secretary of the Treasury makes it clear, Congress: ‘created the name and number combination (printed on the card) to uniquely distinguish the cardholder (trust) from any people of the same or a similar name.’

The relationship between cardholders and their employers:

In accord with the terms of the employment agreement, the employee provides the goods and or services and the employer remunerates with the funds required by the agreement.  Considering the relationship is in reality made between two separate agencies of the same organization (Corp. U.S.), is there any need for money in such a transaction?

Once an employee is so remunerated, they can go to a merchant and exchange the funds for hard assets, like: food, shelter, clothing and transportation.  In virtually every case today, such exchanges are made with other Corp. U.S. agencies; which agencies are exemplified by their own respective TINs. Thus, only a transaction instrument is needed for accounting between them.

In other words, as a matter of law:

Everything the cardholder ever acquires is held in trust for its equitable owner—Corp. U.S.

Further, under the P.A.T.R.I.O.T. ACT, Homeland Security Act, and Real Id. Act, only cardholders can bank, invest, travel, etc.; because, only they can get State issued Id. or passports; thus, Corp. U.S. has effectively cut the people out of virtually all commercial systems.

Has reality sunk in yet?   Just ask yourself: “What do you call a form of government wherein the government (or its agencies) owns virtually all of the businesses and personal property held within the regime?”

Remember the prophecy: ‘…even the elect will be deceived’.  Mark 13:22

To be truly healthy, wealthy & wise you must first understand who and where you are; you have to understand what happened and how to fix it. This is your chance. 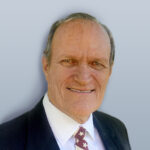 Eric W. Madsen, is the Founder and Trustee of Team Law; an organization dedicated to helping people learn how to learn and apply law. Team Law has joined FreedomFest this year with our exhibit and two breakout sessions presented by our Trustee.

In: “The Hijacking of Our Constitutional Republic: How It Happened, How It Affects You & What We Need to Do to Fix It”, we’ll cover “the rest of the story” to show you who made this happen, how they did it and point you to the remedy. That session sets the foundation for our 2nd session: “Debt and Private Property: Fixing America’s Most Hidden and Destructive Problems”, where you’ll learn the reality of the Prevailing Mythology’s effect on you. You’ll learn how you can take back control; discover your actual nature (sovereign) and the simple means of restoring your control over everything you thought was yours, and more importantly, you’ll learn the value of securing it under your own natural nature and control. You’ll also learn the only remedy that literally guarantees a peaceful restoration of our Constitutional Republic and Liberty.

Join us at FreedomFest; July 21-24 in Rapid City, South Dakota.

Previous StoryNobody Gets Footloose in D.C.
Next StoryOn the Road Again–You Come Too!