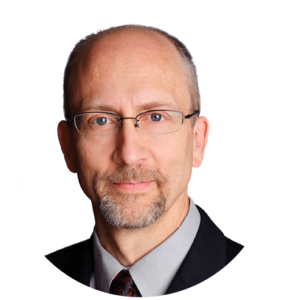 I have spent more than 35 years in global markets, and if there’s one thing I’ve learned it’s that you never, ever take anything China says for granted. Yet, that’s exactly what millions of investors are doing when it comes to China’s “One Belt, One Road” policy. Most will pay a terrible price when the dust settles.

You, on the other hand, have an opportunity to get on board immediately with a recommendation at the center of it all.

China’s ambitions are extraordinary and unprecedented.They’re also a new development, at least if you believe The New York Times, which published a very well done article on China’s “One Belt, One Road” policy on May 13th as part of its Business Day feature. In reality, the “One Belt, One Road” policy dates back to 2013 when President Xi Jinping announced the Silk Route Economic Belt (SREB) and the Maritime Silk Route (MSR), intended to guide national vision and growth during state visits that year.

I first caught wind of preparations, though, during the Asian Financial Crisis of 1997 when China realized that it relied too heavily on trade with the United States, and that structural problems within its economy could be solved by protecting its competitiveness outside its borders. It wasn’t easy to be a lone voice in the wilderness at the time, but I didn’t give up then any more than I will now. Entire countries would be faced with the decision of their lives, I reasoned – go along for the ride or get left behind. As I saw it unfolding, Chinese growth would be the single largest creation of capital in mankind’s history.

Investors now have to make a similar decision. No longer needing to hide its plans for fear of being discovered, China’s just played its hand for the world to see. Not only that, but Beijing invited world leaders to hear what that nation has in store for the foreseeable future. Noted President Xi Jinping, “We have no intention to form a small group detrimental to stability. What we hope to do is create a big family of harmonious co-existence.”

Did you catch that?

Most Western media glossed right over this, which is not surprising given that very few people understand the subtleties of Asian thought as conveyed through translated language. Xi is putting the planet on notice that China intends to set the world’s tone for globalization as it sees fit. At the same time, he’s very deliberately sending a message to Washington that China is going to fill the void created by generations of failed American foreign policy and, specifically, by Trump’s “America First” programs.

If you’re just joining us, the “One Belt, One Road” plan is a $5 trillion initiative being undertaken by China to remake the world in its image. Not “just” the $1 trillion everybody thinks.

It’s a task that makes the post-WWII Marshall Plan, intended to secure alliances in Europe, look like amateur hour. This time around we’re talking about a concerted economic effort covering 65% of the world’s population, more than one third of global GDP, and more than 25% of all goods and services sold worldwide. The goal is to redefine the global political and diplomatic “orbit” by drawing entire countries into China’s way of doing things via the re-establishment of the fabled “Silk Road” trading route.

Western leaders, particularly those with limited experience in China, see this as a “program” intended to keep the Chinese economy going. What they fail to grasp is that the initiative is uniquely in China’s interests and that China will lead the parade using state capitalism as its global roadmap. More than 52 nations are already on board in some capacity. People worry about Chinese military expansion. However, as I have pointed out for years, it’s their wallet you have to watch out for. 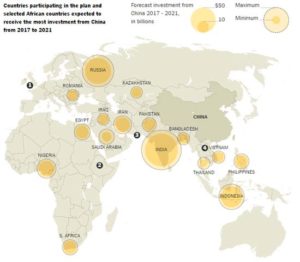 Most investors will look at this map without understanding the consequences as I’m laying them out for you today:

Pakistan, for example, borders China’s Xinjiang area where millions of Uighurs live. As The New York Times notes, officially an autonomous region, Xinjiang’s Uighurs are Muslims who identify with other Central Asian nations. So spending a few billion dollars to build highways and expand ports that stem the flow of Pakistan’s terrorists makes sense to Beijing, as does the port in Gwadar where a Chinese company has a 40 year lease, presumably in the interest of the Chinese navy.

Unbeknownst to most western investors, China’s been actively building roads, stadiums, pipelines, railways and all sorts of critical infrastructure in Africa, the Middle East, the surrounding Asian region, and South America for decades.

And that’s your entry.

How, though, will take some getting used to. Let me explain.

Engage China, or Fall by the Wayside

The “One Belt, One Road” project is so comprehensive and we are talking about so much money that any Western company that wants to grow in any industry will have to do so with the express intention of keeping Chinese interests in mind. Simply put, companies that ignore China will fail, or fall by the wayside. Those that engage China or Chinese interests will do very, very well.

Take Apple Inc. (NasdaqGS:AAPL), for instance. CEO Tim Cook refuses to let go of the notion of doing business in China despite widespread criticism in the West, because he “gets it.”

Or General Electric Company (NYSE:GE) which plans to bid for an estimated $7 billion in orders for natural gas turbines on top of the $2.3 billion they sold to China last year alone. In 2014, the figure stood at only $400 million, according to The New York Times.

To be fair, investors tell me frequently that they worry about China failing, and I respect that. China’s a scary place if you have no way of understanding what’s happening and no way of identifying the right kind of profit potential. The game changes, however, if you know what to look for. Many investors think in terms of specific sectors or even products. But I think that’s very confusing because you have no idea what leads where.

I prefer to divide China’s investment potential into five key “pathways” for lack of a better term, each one of which is backed by more than $1 trillion in profit potential:

Most investors think it’s simply a Chinese version of Amazon.com Inc. (NasdaqGS:AMZN) which works if that’s your frame of reference. But, a very different picture emerges when you view the company in the context we’ve discussed today.

The company just inked a deal with First Data Corp. (NYSE:FDC) – a credit card processing service based in Atlanta – as a means of serving the 4 million Chinese who travel here, according to Alipay North America’s President, Souheil Badran. What they’re really after is the 4.5 million U.S. merchants who accept Apple Pay, Android Pay and PayPal because they’ll serve as a nice complement to the 450 million active monthly users Alipay already has around the world, and the $5.5 trillion Chinese mobile payments market. To put those numbers in perspective, you’re talking about a company with nearly 200% more customers than people we have living here and a mobile payments market alone that is 50X the size of ours.

Payments, you see, don’t matter if you can’t move money. These deals and the ones that will inevitably follow give Alibaba “best in class” access to fraud detection and data analytics – both of which can then, in turn, be used to develop global international mobile payment standards…in China’s image. Speaking of which, lest you think I’m being fanciful, this is already happening.

What’s happening is a major paradigm shift on a scale that most investors remain blind to. Whether that’s because they simply can’t process what’s happening or don’t want to is moot. China’s plans will create an entirely new batch of millionaires within the next five years and I want you to be among them.

In closing, I realize that what I’m sharing with you today make may you uncomfortable. Big changes usually have that effect, especially when they permanently alter the world you think you know… or grew up with. But that’s precisely why this is so very important and could be so very profitable.

To that end, I’m going to be sharing the stage in July at FreedomFest with two legendary investors who understand what the rise of state capitalism a la China means for your money better than anybody: billionaire Jim Rogers, who famously drove the Quantum Fund to 4,200% gains before retiring in 1980, and Dr. Mark Mobius, who has spent more than 40 years in the world’s emerging markets and who is executive chairman of Templeton Emerging Markets.

Plus, I’ve arranged an exclusive session for members of the Total Wealth Family where we’re going to talk about the Unstoppable Trends we follow and investment opportunities I’m tracking right now. To register with an exclusive discount, click here and use the code MONEYMAP.

Previous Story2017: The Year of the Rooster, or The Year China’s Chickens Come Home To Roost?
Next StoryNewsmax Reveals the Top 100 Most Influential Libertarians List