The Capital Research Center is excited to attend our third FreedomFest! Through our Dangerous Documentaries film brand, we’ll be screening four of our films at the Anthem Film Festival and participating in 6 panels. We hope you can join us! And please visit us in booth # 406.

The Capital Research Center was established in 1984 to examine how foundations, charities, and other nonprofits spend money and get involved in politics and advocacy, often in ways that donors never intended and would find abhorrent. From the start, CRC has exposed how those organizations are “captured” by interest groups and used to undermine Americans’ freedoms.

Since then, we’ve expanded tremendously.

Today, the mission of the Capital Research Center is to expose the agendas of funders, activists, and politicians who use the power of government to benefit special interests. We investigate and expose every type of political influencer, with the goal of letting the American public know who is pushing for policies and ideas that subvert our liberties, and why they’re doing so. We also investigate the mechanisms by which influencers attempt to deceive us, publishing work on media bias and censorship of conservatives and libertarians.

We’re not afraid to take on the Washington Establishment—Republican, Democrat, or anyone else.

We do have a specific point of view. We believe in free markets, Constitutional government, and individual liberty. But facts are facts, and our journalists and researchers go where the facts lead them.

We spread our work via multiple websites, a magazine, a weekly email newsletter, op-eds in major publications, books, videos, podcasts, and films. We’re also a source of information for commentators and people in the news media.

We release our well-known short-form animated videos regularly on our social media pages and YouTube channel. These videos have over 17 million views to date and have been translated into numerous languages including Polish, Portuguese, Vietnamese, Bulgarian, Serbo-Croatian, and more. Intended to inform younger audiences, these videos spread the basic facts on how left-wing influencers have misled the American public. 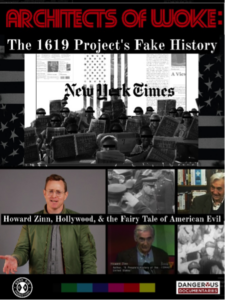 We release our films under our Dangerous Documentaries brand. This includes No Safe Spaces, our webseries The Politically Incorrect Guide, The Architects of Woke, and our America Under Siege series. In addition to those projects, we will release a feature documentary about Jack Kemp this summer.

At InfluenceWatch.org we host an online encyclopedia that profiles public policy influencers. With thorough research and extensive citations, InfluenceWatch seeks to provide balanced information to inform journalists and academics about the realities of the groups influencing the news cycle.

We also have the InfluenceWatch Podcast, which takes information from InfluenceWatch.org and uses it to explain who is behind the news of the week. Hosted by InfluenceWatch.org Managing Editor Michael Watson, the podcast releases every Thursday on iTunes, Stitcher, Google Play, and YouTube.

Most recently, we launched the site DarkMoneyATM.org. This uncovers the liberal Left’s $500 million dark money ATM, which funnels money into movements furthering their agenda but without accountability.

At ClimateDollars.org, we expose the truth about the money behind the public debate on climate change. Despite widely cited claims that a vast network of organizations are spending almost a billion dollars annually to “deny” climate change, our extensive database proves that left-wing groups spend massively more than right-wing groups on climate activism.

In our monthly Capital Research Magazine and on CapitalResearch.org, we report on left-wing unions, environmentalist groups, foundations, and radical activist groups, including Antifa. We promote charitable organizations making a difference in local communities in our “Doing Good” series, proving the welfare state is not the best way to aid the poor in America. In our “Deception & Misdirection” series we profile those who actively mislead the American people to push a political agenda and explain how they get away with it.

Under our Center for Strategic Giving brand, we advise donors and foundations on how to ensure their money is used the way they intend. We published the book How Great Philanthropists Failed & How You Can Succeed at Protecting Your Legacy, which explains how influential foundations, such as the Ford Foundation, were captured by the Left against the wishes of their patrons.

Though we’ve been around since 1984, CRC is growing faster than ever, and we’ll have many more exciting new projects on the horizon.

We are the Capital Research Center, America’s investigative think tank.

Previous StoryElection Integrity: Securing the Sanctity of the Ballot Box
Next StoryNot a Safe Space, Not an Echo Chamber: A Rollicking Good Time