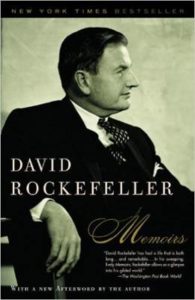 Grandson at once of the creator of perhaps the world’s greatest capitalist fortune and of one of the U.S. Senate’s most venerable Republican grandees, David Rockefeller died earlier this year at age 101 as an enigma or even an anathema to many libertarians and conservatives.  Unrepentant globalist, establishment Republican, banker to the world and friend of the Fed, he served for decades as Chairman of the Council on Foreign Relations, the same “CFR” that conspiratorial critics noted was sited across 67th Street from the Soviet Embassy.

Founder of the equally invidious Trilateral Commission, an enthusiastic Bilderberger, a devotee of Bohemian Grove, and brother of the big spending New York Governor and Vice President, David was more likely to be seen beaming at Nelson Mandela than befriending Ron Paul or John Stossel. Yet no other business leader of our time chose an intellectual heritage and education so dominated by the giants of the Austrian free market creed. DR’s signature achievement—contrary to every outside pressure, temptation, expectation and imposition—was to summon the discipline and grit to jump the tracks and become a self-made man. Rather than slipping into the usual political and cosmetic charity channels of his family, he allied himself at Harvard chiefly with such teachers as Austrian paladins Joseph Schumpeter and Gottfried von Habeler. His best friend was my fiercely conservative father, who as Crimson editor greeted Franklin D. Roosevelt on his visit to the campus during Harvard’s Tercentennial celebration with a front page editorial declaring “let the presence of this man in the White House serve as a useful antidote to the natural over-emphasis on Harvard’s successes.”

Inspired by Austrians Schumpeter and von Habeler, David remade himself with a Ph.D. in economics at the University of Chicago under Frank Knight. Conceived in consultation with his tutor Friedrich Hayek at the London School of Economics, where he spent a year after Harvard, DR’s thesis was a formidable 85 thousand words of anti-Keynesian rigor. In London, David’s favorite teacher was Lionel Robbins, then “a firm advocate of the market and dedicated opponent of government intervention.” DR’s nemesis was the charismatic socialist “pied piper” Harold Laski, whose lectures he described in his autobiography as “superficial” and “often devious and misleading.” Dismissing him as a “demagogue,” David blamed Laski for pushing India toward a socialist slough. Laski’s radicalism, noted David sardonically in a letter to his father, stemmed “more from envy toward those who are more successful than from pity for the poor.”

At the Chase Manhattan Bank, David was a global ambassador for capitalism, who used the aperient symbol of his name to take his message and his bank’s mission through the Iron Curtain and into the tyrannies and kleptocracies of the Third World. But he knew what he was doing and what he was representing. Although some observers of libertarian bent have been skeptical of his globalism, they have failed to explain how capitalism could expand or prevail in a time of Cold War without American outreach and evangelism.

David made his compromises with the welfare state, but “my greatest concern,” as he concluded in his autobiography, “is that the pendulum has swung too far in the direction of unaffordable safety with too little attention given to sound policies that will stimulate economic growth…American capitalism has brought more benefits to more people than any other system in any part of the world at any time in history.”  He will be missed.  – George Gilder

George Gilder is a featured speaker at FreedomFest, the world’s largest gathering of free minds. Join George and 250 other speakers at the 10th anniversary celebration July 19-22, 2017 at Paris Resort. To reserve your ticket, go to www.archive.freedomfest.com/register-now or call 1-855-850-3733 ext. 202.

Previous StoryA Me-Too Robo? What’s That? And How Can It Improve Your Wealth?
Next StoryIs There a King in America?