Decentralization is the only healthy way to avoid collapse, or recover from it

In the twentieth century, Americans had national unity. Such unity was achieved through centralized media and the inculcation of civic narratives in the schools. This wasn’t a conspiracy so much as a sign of the times. In those days, it was possible to find common ground.

Those days are over.

Today, illiberal extremists hover over a pile of dried-out Constitutions: One side has Twitter mobs and Molotov cocktails; the other side has tiki torches and conspiracy theories. We haven’t seen this kind of animus since the 60s. It’s going to get worse before it gets better because more Americans are getting sucked into affinity groups that view the others as enemies.

In the internet age, no civic narrative can long prevail. Manufactured consent was only possible in the Blue Church days, that is, the days of ABC, CBS, and state-approved social studies books. We now have an information ecology polluted by sensationalism, availability cascades, and meme wars. Those who color outside tribal lines are greeted with hostility. Why? People crave solidarity more than certainty.

These culture wars will distract us as America plunges headlong into a sovereign debt crisis. 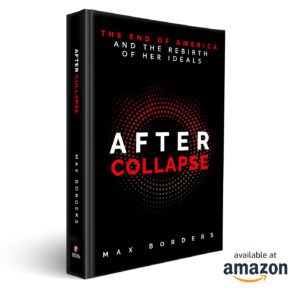 So, for better or worse, society is already pulling us towards decentralization. And so are invisible forces of change that you might only recognized once the dust settles.

So what can be done?

It’s time to break up.

There are all kinds of ways to do it. I set out a guide in my new book, After Collapse. If you think “this guy is trying to sell me a book,” you’d be right. But I wouldn’t take a dime if I could somehow get it into every American’s hands. The message is that important. Collapse is coming. And we have to be prepared for it: mind, body, and spirit.

After Collapse is not a prepper’s book, though that couldn’t hurt. Instead, each chapter corresponds with seven dimensions along which America is breaking down:

The punchline is: only decentralization can save us. Let me focus on that point.

Breaking up is not that hard to do.

We have to create space for institutional pluralism. So it might be time to break up the country a bit more. Peaceful secession. A loose confederation or at least more subsidiarity (federalism). Let people experiment and be united in experimentation. Let the Bernie Sanders supporters turn Vermont into a socialist, buy-local paradise. Let Northern California break off from the Bay Area and SoCal. Let New Hampshire become even freer. Let the Republic of Texas separate, even if Austin keeps-it-weird with its own independent city-state.

This is nothing new. And it works.

Polycentric legal frameworks like those in Switzerland should at least help us localize tug-of-war politics. We don’t have to stop trading with one another (and we probably shouldn’t). But we’d have to stop trying to impose monolithic laws upon people who want to live in different cultural-political niches. And of course, we already have some laws on the books that would help us do it.

Some might object that the Articles of Confederation was tried and failed. That’s an argument for another day. In brief, the Articles were simply insufficient, and we have the means at our disposal to fashion a robust governmental system that allows for plenty of checks and escape hatches. Debates over the proper size and role of government are over. Each jurisdiction has to prove itself. It’s time to try (at least) fifty experiments so that we can all vote with our Hondas.

Such a system would be a step in creating a more antifragile condition. At the very least, California’s catastrophe should remain with California. Such a system would drop much of the incentive to think of one’s own political ideals as requiring violent implementation on behalf of 325 million souls, whether such violence is carried out through populist referenda or executive orders.

Instead, we would have to use what Dierdre McCloskey calls ‘sweet talk’ in order to persuade more human souls into this jurisdiction or that. We create more experiments in living. Some of them might lean theocratic. Some of them might lean socialist. As long as each serves its customers sustainably, then so be it. The more systems there are, the more likely one is to find the right fit. No need for civil war.

Decentralization is how we might avoid collapse, too, but there are too many perverse incentives keeping the current system in place. Therefore, decentralization is the light at the end of a very dark tunnel for America. It’s time to break up. We might not have a choice. 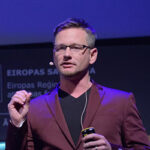 Max Borders is author of After Collapse: The End of America and the Rebirth of Her Ideals.

Previous StoryAmerica’s Marketplace of Ideas is Broken – Ranked Choice Voting Can Fix It
Next StoryDefending Democracy, One Dollar at a Time