Instead of feeling resigned about international indexes having “increased their allocation to securities in authoritarian states” in recent years, Julie Cane, a former Naval aviator, spied opportunity and founded Democracy Investments.

“Many investors have no idea what is in their portfolios. They just see an international index but when you look inside it. What and where are the allocations?” asked Cane, who has more than two decades of experience in financial services, including positions at Wells Fargo, Charles Schwab Advisor Services, SEI Investments, and Autodesk Ventures.

“Democracy is declining globally. It’s a trend. If you want to help turn that around, many people agree the number one way to do that is economically.”

What is Democracy Investments and how did it come about? 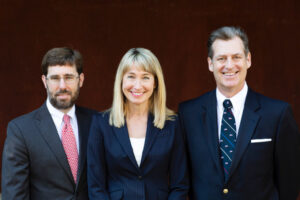 Last summer, I was brainstorming with our Chief Economist, Richard Rikoski and our Chief Investment Officer, Christopher Browne CFA. Rick had been modeling coronavirus death rates using The Economist’s Democracy Index, which analyzes countries’ democracy scores based on 60 indicators that roll up into the themes of electoral process and pluralism, civil liberties, functioning of government, political participation, and political culture. Rick has a PhD in marine robotics from MIT and frequently runs all kinds of sophisticated algorithms bringing together different data sets. He suggested, “Why don’t we reweight an international equity index using the Democracy Index and then you’ll have a neutral, transparent way to stop what’s been going on, which is more and more indices passively investing in authoritarian states.” A brilliant idea! So we did.

What else compelled you to launch the company and the Democracy International Fund ETF (ticker: DMCY)?

I’ve been passionate about democracy my whole life. I’m a former Naval aviator and my grandfather was a POW and a fighter pilot in WWII. My dad was an immigrant from Germany and then served in the US Navy. I grew up feeling very strongly about democracy and am even more passionate about it today. To be able to bring that to the forefront of the conversation is very exciting.

What are your top priorities? Given your short history, I would think that spreading the word ranks high. 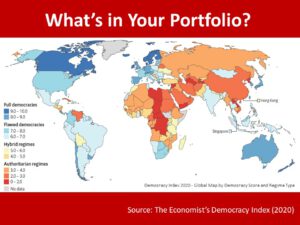 Yes — very high. That as well as raising awareness of the products we compete with, which have increased their allocation to securities in authoritarian states more and more over the past five years. Many investors have no idea what is in their portfolios. They just see an international index. But when you look inside it, what and where are the allocations? If it’s just returns, we have very similar returns and you could argue we have less political risk. So even for investors who aren’t worried about impact, we’re a great solution. But we’re hoping to appeal to their values, too. If you want to be highly diversified in international investments, you can feel good knowing you’re getting similar returns and you’re helping democracies grow.

China’s weighting in the Solactive GBS Global Markets ex U.S. Index (the fund’s starting universe) is 11.4% while its weighting in the Democracy International fund is 3%. It looks as if the difference is invested in more democratic countries, such as Japan.

More broadly, is it better for democracy to have money invested overseas in highly democratic countries or in U.S. companies that derive most of the revenue domestically? I’m curious about the calculus of that.

From purely a market valuation perspective, international equities are trading at a significant discount to US equities. Given that, we believe it is prudent to have a healthy allocation to international investments, and if you are going to do that — who would you rather give your money to? Democracies or authoritarian states?

The U.S. is a flawed democracy. We have a lot of work to do. We chose to be ex-U.S. because we didn’t want to get caught up in the fray of all the noise going on at home right now. It’s just so polarizing. And most people are a little more familiar with how to invest domestically.

Yes, and over the past 10 years, that strategy has paid off. In the 80s and 90s, international equities were viewed as a risk diversifier against US equities, due to their lower correlations. However, as the global market converged, so did correlations. Now it is purely about expected returns. But going forward, we might see a reversal of the policies and conditions of the past 10 to 15 years. Given the current valuation attractiveness of international equities, investors might want to take another look.

At an even higher level, we’re hoping to get people away from home bias and to talk about democracy globally. Our goal is to affirm democracy at home by investing in it abroad.

It’s sadly a geopolitical trend, and authoritarian states are figuring out how to use our own systems against us. They’re winning in certain areas that we’re going to have a hard time turning around in the market. They are stealing our tech, manipulating our social media, and messing with our elections and cyber security. It goes on and on.

The democracies are not doing a good job of banding together to overcome these threats. Authoritarians are winning over and influencing smaller states. They’ve figured out very crafty social media campaigns to bring down people who are trying to speak the truth and discredit them, and they’re getting ahead in certain technology sectors such as AI and quantum and information warfare.

What’s the vision for the company? What do you hope to see in one, two, three years down the line?

Our vision is to grow large so that countries recognize the shift in capital flows and are incented to improve their democracy scores in order to get more capital. Ideally, investors become more aware, and measuring democracy becomes more transparent. And they understand that our competitors are passively investing in authoritarian states. Then we’d like to expand into fixed income and the other products we talked about earlier, other flavors of democracy-weighted products.

Democracy is declining globally. It’s a serious trend. If you want to help turn that around, the number one way to do that is economically. If you want to be part of a movement that helps bring democracy back, your portfolio should reflect that.

Thank you, Julie. And thank you for your service. 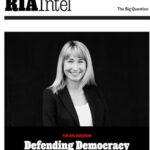 Julie and her team founded Democracy Investments, a mission driven asset manager, with the goal of providing investors a new way to advance and fuel the growth democracy globally. Meet the leadership team at Booth 317 or join their breakout session “Invest in Democracy: Learn a New Approach to International Investing that Incentivizes Democracy” at FreedomFest on Friday, July 23 at 2:10pm.

Previous StoryDear America: It’s Time to Break Up
Next StoryWhy You Are Not a Conservative