Science fiction has always offered both a more accurate and more timely look at the future than any think tank. For one thing, a good book is the product of a genius, not a committee of suits trying to reach a consensus. And a format of fiction allows one to speculate in ways that a “serious person” can’t do in nonfiction.

Every educated person should have read the classics by Jules Verne, Robert Heinlein, Isaac Asimov, and Arthur C Clarke, among others. Add Neal Stephenson to that list. I’ve been a fan of Stephenson’s novel The Diamond Age since it was published in 1995. I strongly recommend you read the book.

There are many themes in Diamond Age, which is set in a near-term future (I’ll guess around 2050) when nanotechnology has transformed much of life, although not nearly as radically as I believe will actually be the case. (See my essays on the future here and here.)

But one theme in the book is quite a breakthrough, and spot-on. It posits the creation of “phyles” as the major form of social and political organization. The word comes from the same root as phylum, from the Greek meaning “tribe” or “clan.” But I think it’s also a pun on the word “filial,” with its connotations of family.

The book posits, I believe correctly, that in the near future most nation states will have broken down. Many will have ceased to exist. It’s quite logical, because they’re a dysfunctional way for people to organize. And it’s happening right before our eyes. None of the countries in the Mid-East, Africa, or Central Asia have any coherence. They’re just the result of some ruler’s military prowess, or some politicians’ drawing lines on a distant map. Nation states themselves have really only been around since the 17th century. Before that, people weren’t loyal to a country; they were loyal to a chief, a king or an emperor.

Loyalty to a country can make some sense, on at least a primitive atavistic level, as long as the inhabitants of the “country” share a common language, religion, ethnicity, and customs. But it makes no sense when they have little in common. So it’s natural, and salubrious, for the various religious, ethnic, racial, cultural or economic groups within a country that’s become too big, too “diverse,” and too “inclusive,” to want to get out. Everyone recognizes—even if they don’t say it—that a national government is just a vehicle for theft, benefiting the group that controls it.

As the world becomes more educated, the average man becomes more acutely aware of that fact. And as jet travel and the Internet become universal, people start to realize they might have almost nothing in common with their so-called “countrymen.” And a lot more in common with people who may be on the other side of the globe, many of whom will feel the same way about their own countrymen.

I can tell you that I have much more in common with friends in the Congo or China than I do with my fellow Americans living down the road from me in a trailer park. I have nothing in common with them. These people not only aren’t my friends, they’re liabilities. And they may turn into active enemies under the right circumstances. I’d rather associate with people with whom I share common values and interests, not just the same government ID.

In any event, almost all the world’s nation-states are terminally burdened with debt, taxes, regulations and, increasingly, strife between groups fighting for either a teat on the milk cow, or political power. The nation state is a dinosaur; it no longer makes sense in a world with today’s technology and demographics.

This explains what we’ve seen in the last generation: the breakup of states. The USSR into 15 components. Yugoslavia into six. Czechoslovakia into two. Sudan into two. This is just the opening round. Most European countries have secessionist movements. Russia should eventually break up into a dozen new states. China into at least a half-dozen. Brazil into at least two. Bolivia into at least two. The list goes on.

In fact, the primary reason that’s given for the very existence of the nation state is to defend its inhabitants. But, with the changing nature of warfare, that’s one of the things it’s least able to do. Can it defend against a nuclear attack? No. At best it can just threaten to counterattack.

In fact, a country with a big military component stationed all over the world, not only can’t defend its citizens, but actually draws in attacks by making enemies among the natives in far off places. In the past, it didn’t matter—the natives were immobile and powerless. Today they can go anywhere, and they have access to a wide variety of weapons.

In today’s world, nation states are no longer the big risk to other nation states. Rather, it’s groups like ISIS and al Qaeda that are a much bigger threat. They can’t be destroyed by dropping a nuke on their cities; they don’t have cities. They can be everywhere and anywhere. But they can easily attack the cities of their enemy. And those are just well-known Islamic threats. There will likely be many others of many varieties, on templates as different as the Red Army Faction, Aum Shinrikyo, or FARC.

The safest way to avoid attack in the age of cheap and easily available atomic, biological and chemical weapons is to be dispersed. At least not to be part of a geographic nation state. From a military point of view, a nation is about as viable as cavalry before WW1 or battleships during WW2.

Not being part of a nation state ameliorates a lot of problems for a person, but it’s not a total solution. What Diamond Age posits, and I think is going to happen, is that people will form phyles, joining in an alliance according to what’s most important to them. Or the way they “self identify,” to use a currently fashionable term. Jews famously stick together relative to the goyim. That’s one reason at least part of Israel (likely excluding the Hasidim and Palestinians) will survive as a nation. One reason Mormons are so successful is that they also favor each other, like the Jews. Muslims (although rarely economically successful, for other cultural reasons) definitely do the same. Birds of a feather (all the outraged hysteria about racism notwithstanding) do, in fact, tend to flock together.

So here’s my prediction of what’s going to happen over the next couple of generations. Many nation states will simply collapse or disappear. Incidentally, I don’t think the US will be a survivor. The country used to share a common culture, albeit with quaint regional variations. That’s no longer the case. The election of Trump has crystalized long simmering, and growing, antagonisms. It’s not that Americans just have a political difference of opinion. It now boils down to mutual cultural hatred, on a visceral level. It’s only been exacerbated by the push for “multiculturalism,” always a stupid and destructive concept, from the usual suspects.

Incidentally, we can break down Canada and Mexico the same way. Much smaller entities within these (and all other) countries would be much more viable. But still anachronistic. And sub-optimal.

So what will happen? Everywhere people will reorganize for mutual support, defense, insurance, companionship, and everything else. But it won’t have much to do with politics as we now know it. They’ll form Phyles.

An outrageous concept, I know. Now you see why radical ideas are best presented in the form of novels. 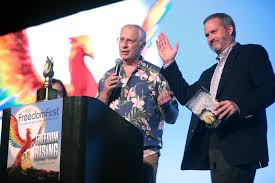 Doug Casey, the founder of Casey Research, is an outspoken libertarian and permanent traveler who has spoken at every FreedomFest since it’s beginning. His novel Speculator won the FreedomFest Read Book award for 2016. Don’t miss his presentations at FreedomFest 2017. To register go to https://archive.freedomfest.com/register-now/

Previous StoryWHAT IT TAKES TO BE AN EFFECTIVE TEAM
Next Story2017: The Year of the Rooster, or The Year China’s Chickens Come Home To Roost?