The government can move in at any moment; however, they can’t censor, devalue or steal math.

History repeats itself. Although the world is experiencing major global unrest, it is also true that there is “nothing new under the sun” – regimes change, power structures shift, and the fourth turning is upon us. It is indisputable that some make it out on top throughout each time of contention while others lose everything. With technology at our fingertips, information is available and those who take the time to learn can set themselves up to make it out of the coming crises prosperously.

Many have heard about bitcoin and its parabolic increase in price, yet they don’t understand its full value proposition because one must shift the paradigm to understand. Technology has allowed for complex concepts to be implemented via software code. In the case of bitcoin, the “good or service” being disrupted is money or the transfer of value. With peer-to-peer exchange being the ultimate goal of bitcoin, we are seeing technology that effectively cuts out middle-men while allowing unbanked individuals access to participate in the global economy. The bitcoin network can be accessed with just a cellphone and a WiFi signal; it is not tied to a single country’s economy; there is an undisputable limited supply; and you don’t have to purchase a full bitcoin. One “satoshi” is the smallest unit of measure and goes to 8 decimal places (0.00000001).

As a decentralized, cryptographic digital currency, bitcoin is an invention made from decades of cryptographers working on creating money for transacting purely online. Since nearly the inception of the internet (an example of a paradigm shift), the concept of secure digital value transfer has been worked on by software developers globally. In Oct 2008, Bitcoin’s white paper was released and in January 2009, Bitcoin’s first block was mined, coinciding with the Times front-page headline “Chancellor on brink of second bailout for banks.” It is clear that bitcoin was created because the people need a better form of money, one that could not be manipulated by central banksters.

With no central authority, bitcoin was initially “mined” by tech enthusiasts using PC power and given away for free on internet faucets. Fast forward to today and there are hundreds of thousands of computers around the world dedicating their power to “mining” new bitcoins and upholding the integrity of the system.

The market capitalization of bitcoin is still less than some publicly traded companies, meaning – you’re still early. In its growth phase, bitcoin has performed like a tech stock. In its mature phase, we will see it behave more like a store of value. If you understand Austrian economics, there is no such thing as intrinsic value, because value is subjective. In the case of bitcoin, its value is being realized as the stability of economies is threatened and as people understand its position as digital gold. Thus far, in 2020, bitcoin has heavily outperformed every other asset class and its non-sovereign nature has proven it is completely uncorrelated to the dollar.

Adoption has snowballed in recent months. Companies such as PayPal, Cash App, Robinhood and Fidelity have bitcoin as part of their suite of services. The oldest bank in America, BNY Mellon, is now able to store bitcoin in custody. Companies like Microstrategy and Tesla have put bitcoin on their balance sheets instead of cash, and Visa is building infrastructure to support bitcoin payments. 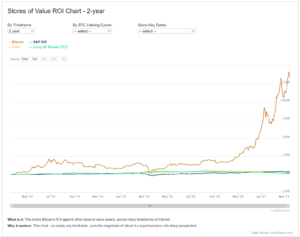 Taking a look at the chart above, we see bitcoin significantly outperform gold, the S&P 500, and US bonds. But why the rapid price increase during a year of unrest and record unemployment? Even over proven stores of value like gold? Below are a few traits of bitcoin to make clear:

In the same way that the internet changed the distribution and flow of information, bitcoin will change money and value. Digital currencies were made for such a time as this, a safe haven for those who appreciate personal responsibility and take the time to learn how to preserve their wealth for future generations. Paradigm shifts create prosperity. If 2020 hasn’t shifted enough of your life, the  coming months will not disappoint in proving the importance of diversification.

For more information on how to safely buy bitcoin, please visit me at bankoferyka.com where I have helped hundreds of people become their own bank by owning bitcoin. Setup a free 20-minute strategy session with me to assess your needs for exposure to the best performing asset class in the past five years. 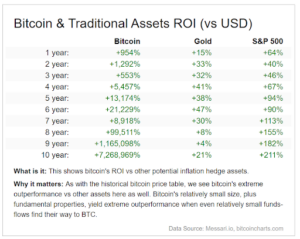 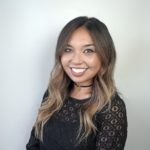 As the Venture Director at a Digital Asset Hedge Fund, Eryka is well versed in bitcoin’s technology. In 2019, she co founded Blockchain Center Miami with a goal of making her city the crypto capital of the Americas. Over the years, Eryka has taught hundreds of people how to safely navigate the cryptocurrency space. Eryka sits on the executive board of the Florida Blockchain Business Association and writes a bitcoin column for Escape Artist Insiders Magazine. She graduated from Embry-Riddle Aeronautical University in 2015 with a pilot’s license and Bachelor of Science in Aeronautics. The ability for blockchain to increase transparency, reduce corruption, and eliminate human error drove Eryka to leave corporate America. She is now focused on bringing technical and economic education on digital assets to the masses. Her affinity for bitcoin stems from an appreciation for sound money and honest reporting. As a teenager, she was a delegate in Washington State for the Ron Paul campaign.

Eryka will be speaking at FreedomFest July 21-24 at the Rushmore Civic Center in Rapid City, South Dakota.