We greatly appreciated the thoughtful FreedomForum Op-Ed “We Will Not Be Silenced” (January 11, 2021), especially its honest criticism of the violence in the trashing of the Capitol Building. Five dead. This follows a summer of inner cities rioting, looting, and killings committed in the pursuit of social justice. 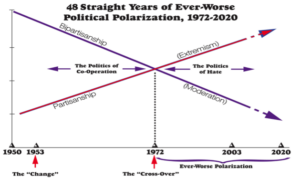 The most recent political violence follows after 48 straight years (1972-2020) of ever-worse political polarization in American politics (Masket, 2009, U. of Michigan Press, p.84). Pew Research also measures the worsening trend for the past 20 years, and VoteView’s research shows that American political polarization is now at its worst level in 150 years! The graph here summarizes the documented, long-term trends.

This steady descent of bipartisanship and moderation into ever-worsening polarization and extremism is the unintended consequence of the deliberate and successful political effort by the two major partisan parties back in the mid-20th century (notably in California in 1953) to change the reward for re-election from bipartisanship to partisan purity. As both of the two major partisan parties—the duopoly—thereafter became more partisanly “pure'”(as in “narrow-minded”), the rewarding of partisan loyalty while punishing bipartisanship had the unintended effect of growing the influence of the extreme wings in both major partisan parties. Somewhere in recent time, a “tipping point: was reached and now the growing extremism breaks out as violence.

Moderates don’t climb walls, break windows, throw rocks, torch and trash private property, or shoot innocent passers-by; extremists do. Five thousand years of human history taught us that the worst enemy of humanity is the closed mind of an extremist, because the closed mind, often intellectually brilliant, is both the most intolerant and the least mature emotionally. The closed mind is the same mind that sneers and snarls at the open minds of moderates and bipartisans. To be clear, not every partisan is an extremist, but every closed-minded extremist is a partisan.

Inexorably for the past five decades, the RINO’s (liberal Republicans) and DINO’s (conservative Democrats) in the two partisan parties have been sneered, shunned, and finally primaried out of their party by the rising influence in each party of their extremist wings. The “Great Moderation” of 1900-1970 bipartisanship in American politics is long gone, dying at the rate of a thousand small cuts since 1972, primary after primary for nearly fifty consecutive years. 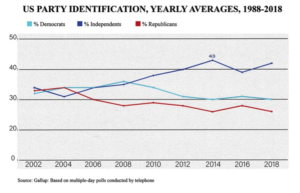 As the extremist wings in both partisan parties grew ever-more influential, millions of American voters walked away from the duopoly and registered as non-partisan or independent. Gallup’s Party Identification polls measure the result: After fifty years of rising partisan purity in the duopoly, non-partisans are now the largest political group in American politics, far larger than either of the two partisan parties. Gallup measures the long-term trend in the accompanying graph.

Now, in the winter of 2021, some conservatives believe rioting in the national Capitol building is their right of free expression in pursuit of…social justice? The extremes, both religious and atheist, whether Right or Left, always justify their destructiveness by making a moral argument, oblivious to the immorality of their psychic self-destruction. As ever, it is the innocent who will pay the cost in the politics of closed minds: Five dead in D.C.

The politics of America are now locked into a structure that will only produce ever-greater partisan polarization, each year worse than the year before. Unless the American people decide to reform the structure of their national electoral politics—deliberately changed by the duopoly to punish bipartisanship—the political violence in the early 21st century will only continue.

Unfortunately, it is likely the violence will accelerate and deepen in severity, because the duopoly painted itself into a corner, incapable of self-reform. They both realize that as a minority party shriveling down to only 31% of the electorate, in any meaningful reform they will lose elections and thus lose their control over government power. It’s a pernicious form of “legal corruption,” the cycle of political violence that will grow out of the ever-worsening partisan polarization in American politics.

We are on a flushing descent culturally and politically in the early 21st century, in part because the partisan parties are never mentioned in the U.S. Constitution (by deliberate decisions of Madison and Washington, who shared long correspondences about their abhorrence of “factions” in England’s parliamentary politics). Since partisan parties are never mentioned, there are no Constitutional limits placed on the partisan parties capturing power and control over government power. Unrestrained power is just as corrupting as Lord Acton’s absolute power. Without any Constitutional restraints on partisan political parties gaining power over government’s powers, some level of legal corruption threads its way through every election cycle.

As bad as the political violence has been recently, it’s going to get worse unless positive, meaningful reform of the structure of American electoral politics is accomplished. Today, we have 48 straight years of rising polarization, which is the politics of hate. Culturally, with the storming of the Capitol we’ve reached a tipping point. When will the American people finally put all partisan political parties under the control of their Constitution?

The FreedomReform Party will launch at the July, 2021 FreedomFest by offering American voters several Reform Amendments for their consideration, including several Reform Amendments that bring all political parties seeking control over government power under the U.S. Constitution. Madison and Washington meant well back in 1789, but the modern duopoly created a method 50 years ago to take unintended advantage of the Founders’ idealistic optimism.

For additional information go to www.freedomreform.org

Previous Story3LP: To Live and Let Live… and Thrive!
Next StoryNew Ways to Use Minerals and Plants to Promote Healing