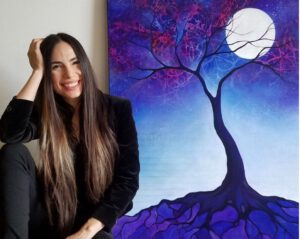 Jacqueline Claire brought her paintings to FreedomFest 2021 from her home in New Braunfels, Texas, which she describes as a little time-travel German river town hidden between Austin and San Antonio. Eager to share her art with the liberty loving community, she feels a camaraderie with freedom fighters. Our group may share different political beliefs and even different spiritual beliefs, but it unites around something bigger—the pursuit of truth rooted in family and faith. That, to Jacqueline, is a glorious illustration of unity in diversity.

“I don’t know of any other crowd like that,” she says of the festival. “I wanted to share my art, which is about the liberation of the human spirit, with fellow truth seekers who are trying to answer questions and trying to find how they can contribute to this political battle, this spiritual revolution, this American revolution that’s happening.”

Creating Art that Illustrates the Experience of Seeking Sovereignty 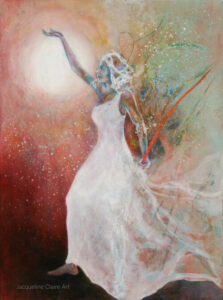 Working in an ideological landscape where words are often twisted by corrupt powers, painting can soothe and clarify. Art can also go directly to a person’s heart, and that is the most courageous way Jacqueline’s paintings contribute to the needs of the time as she sees them. “Warrior of Light,” which depicts a luminous woman dancing with the full moon; “New Beginnings” which portrays tree branches growing like the veins of a human heart; and “Immemorial Being” in which a human emerges with the soil of the earth, are among others that illustrate the experience of seeking sovereignty.

Free from the layers of political narratives, this evocative, dreamlike imagery releases the shackles of a material reality and embraces a new, yet ancient, spiritual reality. Symbols and images may be interpreted in many ways from one viewer to the next. This shift welcomes the beauty of the individual.

Lions like Jacqueline are leading the country back toward its roots of individual freedom. Her art builds on this bravery. She’s not here to be comfortable; she hopes her art will activate every person to feel that he or she is a powerful, energetic being on this planet to grow, to learn, and to bring joy to the shadows of this country and this world. Sparking the joy needed to act with courage, Jacqueline embodies the root of the word cor, which is Latin for heart. Thus courage suggests “speaking one’s mind by telling all one’s heart.”

Civil Liberties Hang in the Balance

With one foot in the spiritual realm and the other foot in the material, Jacqueline is very much aware that our civil liberties hang in the balance. “There is an intentional effort to destroy the values of this country,” she says. “The people who protect and embrace their God-given rights present a fundamental threat to groupthink and manipulation.”

Much of the country has been overtaken by groupthink through emotion, and this phenomenon speaks to the human condition. We are made of stories. Art can reach the heart and reach across 3D divides, which are very stark, and blur the lines beautifully—reminding us of our common humanity.

Jacqueline’s journey from being an actress in Hollywood to painting and podcasting in Texas has been one thread in the whole country’s tapestry of spiritual and political revolution. Living in LA in 2016, she awakened to the corruption in the film industry and the entire nation. “We revere people who are on the screen,” she says. “Even though I claimed to have a spiritual practice [then] and have spiritual principles, ultimately I was completely guided by the talking points of my culture, whether it was my profession or my beliefs about any particular topic.”

Creative environments that once embraced big, beautiful ideas have narrowed in a sinister way. “These people who had been all about art, acceptance, love and beauty were suddenly so triggered, so hateful,” she reflects. “It was just that slow cognitive dissonance. It’s almost like a virus. Why is everyone turning into this scary monster?”

Resisting a tidal wave of “No.” 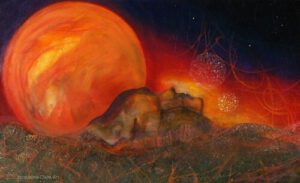 Groupthink lends itself to a certain godlessness, too. The oppression of not being able to have a different point of view from the group weighed heavily on Jacqueline while she was pursuing acting in LA. Her peers professed being open to seemingly everything under the sun, but the moment she or anyone else brought up God, there was a “tidal wave of ‘no.’”

Searching for more authenticity and opportunities to tell her own story, she left her acting career behind early in 2018. Through all this, she was always a spiritual person. But that part of her life used to be the icing on the cake, she says. Becoming more aware made her a more active agent in the spiritual battle at hand. She dives into this battle with grace on her podcast “Spiritual Conversation,” exploring current events such as the governors’ breaking their own pandemic regulations and trends such as the inversion of language, all from a faith-based perspective.

“The hijacking of language is part of this war,” she says. “How unfair that you can’t say ‘liberal’ without it meaning a rather rigid set of beliefs or you can’t say ‘freedom’ without it triggering people to think that you’re about to shoot them or something! That’s really sad.”

Weaving this vocal art with her visual art, she encourages “spiritual discourse.” The word “discourse” is often paired with “political” as in “political discourse.” To Jacqueline, it’s all the same deep fundamental exploration of truth. It is prioritizing truth and honesty. It is expanding one another’s vision with compassion.

Revere the Rights of the Individual

For any healing on any level, the rights of the individual need to be revered. The remembrance of individuality as a beautiful, artistic concept is key to healing the nation. “We have to be thinking for ourselves and not just regurgitating concepts that have been handed to us,” Jacqueline says. “With the 24/7 news cycle, it’s really hard to escape the constant messaging. You can’t heal something as deep as racial prejudice or disparities with that happening. We couldn’t heal a friendship with that happening, right? We’re all friends here, we’re all one human family. There have been pains in the past, but you can’t heal that with constant intervention from other voices who are like ‘she hates you real bad.’ And then the other side is probably saying the same thing.”

Art is one way to clear the static interference. Getting in touch with our own hearts and seeing with our own eyes paves the way to a more forgiving, forward-moving world. Individuality is both spiritual and artistic in nature. As Jacqueline moves through life as an artist, speaker, and all around beautiful human, she holds the faith that humanity are flowers of one garden. We’re diverse in race, ethnicity, and culture…and significantly, in thought. The diversity of thought is perhaps the hardest to embrace. But ideological diversity makes creative freedom ring.

For more about Jacqueline’s journey and crises of faith and to listen to our podcast, “Jacqueline Claire: Divine Civilization vs. New World Order,” subscribe to Free the People’s YouTube channel. Explore Jacqueline’s art at jacquelineclaireart.com. 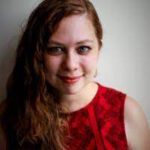 Sienna Mae Heath is on a journey that began on the left and is now leading her on a search for liberty and real unity. She is the host of “Leaving the Left for Liberty,” sponsored by Free the People. Watcatch the series intro video, “Leaving the Left for Liberty,” and if you’re a whistleblowers or dissident interested in telling your story, reach out to Sienna at [email protected]