The Continental Congress signs our Declaration of Independence from England, our mother country. Franklin and Adams recommended Jefferson draft the Declaration but they had the final say as editors. And edit they did! For the 56 people who signed the document it was an act of Treason, if caught, you could be HANGED. John Hancock from Boston signed his name most prominently, giving rise to the metaphor that your John Hancock is your signature. 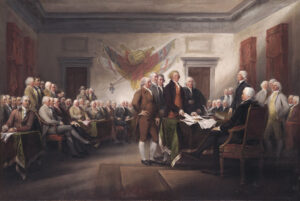 If anyone was to make a bet on the odds of our success it was clearly a very long shot going against the strongest army and navy in the world. But there is something to be said for the value of freedom, the home field advantage of fighting on the land you know and love, and as we often forget, the immense help from the French Navy and some native American allies.

So here we are almost 250 years later.  What still endures? Three key features:

First, Democracy. As Churchill quipped “It is the worst form of government, except for the all the others.”  Now any citizen, 18 years old can vote. In colonial times just males who were property owners. Luckily, we have a written Constitution (England does not); it has just 27 amendments despite about 11,500 proposed amendments.

Second, Free Markets — aka Capitalism — to allow risk takers to start their own businesses as we did in 1998. Most U.S. businesses fail within 7 years, employ less than fifty people and less than thirty percent employ a second generation. Some people look with envy and scorn on successful businesses as robber barons, like the Rockefellers, but small businesses are the backbone of America.

Third: Freedom of Religion and Speech guaranteed in our First Amendment.  Freedom to choose what religion best suits your beliefs. It is alarming that Communist countries are atheists and have outlawed Religion as a competition to their totalitarian governments. Equally alarming are Theocracies: only one religion is legal. Freedom to voice dissent, peacefully, without being jailed as many countries do.

So here is to family, friends and the tremendous freedoms we have from one of the greatest countries the world has ever known. It’s not perfect; it’s a work in progress…but so are all of us!

We are the land of the Free, because of the Brave!

Previous StoryARRRR You Prepared for Attacks on Your Financial Privacy?
Next StoryNational Donor-Advised Funds and the Quiet End to Donor Freedom