Cardiovascular disease is the leading cause of death for all American adults, both men and women. The American Heart Association has been instrumental in publicizing the fact that coronary artery disease is as large a medical issue for women as it is for men. 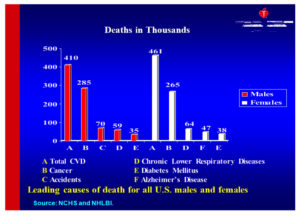 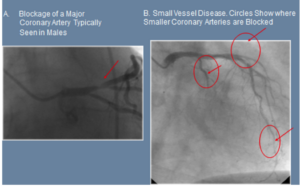 FGF-1 is a natural protein contained within our bodies. It is released upon tissue injury and is the body’s natural response to tissue repair. Human FGF-1 stands out as an attractive therapeutic angiogenesis candidate to treat heart disease due to its potency and its ability to stimulate the production of not only capillaries, but larger arterioles, which are critical in bringing more blood into the injured heart tissue.

A number of clinical trials, both in Europe and the U.S., have established that FGF-1 has the potential to be a breakthrough drug for the treatment of coronary artery disease.

The figure here is from results obtained from a clinical trial in Germany. It displays a coronary artery angiogram from a patient with severe heart disease who received human FGF-1 as a local injection directly into the heart muscle. One can see on the right hand side of the figure the robust “blush” of new blood vessel growth (angiogenesis) 12 weeks after FGF-1 was injected into the ischemic heart wall. All patients who received this treatment experienced a decrease in their angina chest pain and performed better on exercise testing.

In a US FDA-authorized Phase I clinical trial where FGF-1 was injected into the hearts of no-option heat patients, there was a remarkable improvement in angina scores and exercise treadmill tests 12 weeks after the patients received the treatment. The clinical trial received substantial publicity as evidenced in the link below to an ABC Nightly News Broadcast discussing the success that was seen using FGF-1 to treat severe coronary artery disease.

In this video you can see growth of new blood vessels in the heart of one of the patients who was treated with FGF-1. It is believed that once this treatment is available to the public (after US FDA approval is obtained), it could extend by decades the lives of millions of people suffering from coronary artery disease.

Dr. Jack Jacobs is president and Chief Science Officer of Zhittya Genesis Medicine, a bio-pharmaceutical company based in Las Vegas that is developing regenerative biotechnology products through FDA-authorized clinical trials.

For more information about Zhittya Genesis Medicine, our medical science and our clinical trials, you can visit www.zgm.care. If you wish to speak to our Chief Executive Officer, Dan Montano, you can email him at  [email protected] or call 702-802-8373.

Previous StoryWhy You Are Not a Conservative
Next StoryYes, Feminists Can Be Libertarians