For most of human existence, gold and silver have been used as both money and currency. Money is something that has intrinsic value and is universally recognized. Currency is a medium of exchange. While land and oil could be considered money, they are not easy mediums of exchange, making them unsuitable as currency. Gold and silver are scarce in the ground, are perceived as having value due to their scarcity, are malleable making them suitable as currency, and are impervious to the elements. These fundamental properties made gold and silver man’s preferred choice both as money and as currency from ancient times until the 1930s. 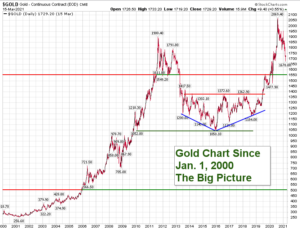 When the US took gold out of currency in 1933 and silver in 1964, the world’s monetary systems were forever altered. While gold backed the dollar from 1945 to 1971, this direct backing ended in 1971. President Nixon ended the gold standard, devaluing the dollar 10% and allowing gold to trade in the free market for the first time in modern history. Today we live in a world of currency that has no monetary value other than the paper it is printed on. This has allowed governments to live beyond their financial means. And, of course, they have done so with gusto.

Some argue today that Modern Monetary Theory, where governments can create as much money as necessary out of thin air, is beneficial to an economy if it does not create inflation. I would argue that the US tried to do this in the 1970s, enacting MMT in 1971 with the decoupling of gold and the dollar and giving birth to modern fiat currency. However, rampant inflation in the US was the direct result of this decoupling of gold and the dollar. Gold started the decade at $41 per ounce and ended the decade at $850 per ounce, and price inflation was also seen in other commodities. 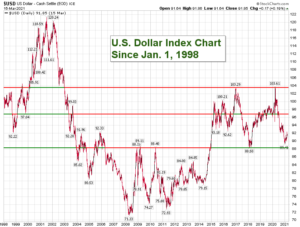 Between 1980 and 2000, governmental debt and deficits worldwide blossomed in earnest. While this was a relatively stable period economically and for fiat currencies, all of this began to change in the 21st century. Computers allowed traders to buy and sell faster and in greater volume than ever before. Computer algorithms now do most of the buying and selling in markets across the globe. Globalization allowed manufacturers to access cheaper and cheaper labor. The result of these and other changes has been a maximization of the ability to create and grow wealth faster and more intensely than ever before. Computers also allowed businesses and investors to create leverage in financial systems that was never possible before. I believe the pendulum has swung about as far as possible toward the human ability to maximize time and effort in these ways and it’s beginning to swing the other way toward greater competition for all the world’s resources. This competition is already happening. Just look at what China is doing in Africa and elsewhere. That is a topic for another day.

Today over 50% of the world’s wealth is concentrated in the hands of 1% of the population. People such as Jeff Bezos and Bill Gates can literally buy countries (smaller ones of course but countries nonetheless) today if they choose to. And it turns out that Bill Gates is one of the largest land holders in the United States today. Mr. Gates is turning his fiat currency back into something of value. Never have so few been able to control so much due to the wealth explosion that has occurred over the last several decades, and most of this would not be possible if currency could not be created out of thin air. This is all a way of saying the world has completely gone off the scale of what was possible financially prior to the creation and utilization of fiat currency. 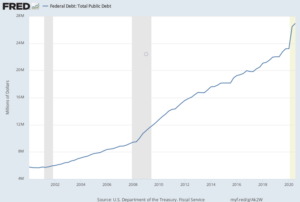 The whole world is now doing monetarily what the US did in the 1970s. Virtually every country is living beyond its means by creating more debt than ever before. And with shocks to the system such as the 2008 financial crisis, and now the pandemic of 2020, the political answer has been, and will continue to be, just print more currency and create more debt in the process. The world’s current fiat monetary system can be compared to some baseball players using steroids, or Enron cheating on their balance sheet to make their stock value more attractive. Players and companies that followed the rules are put into a corner, cheat like the others do to compete, or become irrelevant. Everyone is doing it. So, it’s OK, right?

One thing I have learned in my 40 years of business is that politicians will never fix something until they realize it is broken. When our current worldwide MMT fiat currency experiment breaks, the financial reset will be extremely painful for almost everyone. While I do see a worldwide monetary system based on digital currencies in the future, and perhaps in my lifetime, the transition from fiat currency to digital currency will certainly be a gigantic financial shock for almost everyone.

This is why I own gold and silver, to hedge myself against ongoing currency depreciation and potential currency default. I own land and rental properties for the same reasons. I hope I never need them in the ways I am describing above, but if I do, I will have the most trusted and universally recognized stores of value to protect myself and my family. 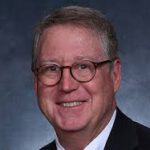 Dana Samuelson is president of American Gold Exchange, Inc. With 40 years in the industry, he enjoys an impeccable national reputation for honesty and integrity with his peers and his clients. He has flawlessly overseen transactions totaling over $1 billion and he’s looking forward to his next $1 billion. A professional numismatist since 1980, Dana worked for some of the most influential precious metals trading companies in the nation before founding AGE in 1998. For nearly a decade he was a personal protege of James U. Blanchard III, one of the true giants of the industry and the individual most responsible for re-legalizing the private ownership of gold in the U.S. He will be speaking at FreedomFest July 21-24 in Rapid City, South Dakota.