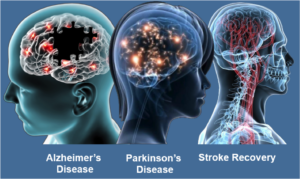 A healthy and intact vascular system in the brain is critical for normal motor and cognitive.human functioning. Any disruption in the brain’s blood perfusion system can lead to dire consequences, as the brain neurons are deprived of glucose and oxygen and begin to become dysfunctional. An attractive hypothesis that is emerging from a number of medical research groups is that the initiation of certain neurodegenerative diseases, including Parkinson’s disease, Alzheimer’s disease and multiple sclerosis, occurs when the blood vessels and the blood supply in the brain become compromised. This can occur either globally (Alzheimer’s disease) or in a highly localized region of the brain as seen in Parkinson’s disease, where in many cases only a very small number of dopamine-producing cells deep in the midbrain are affected. As will be discussed below, clinical research has conclusively shown that blood perfusion is diminished in these diseases.

In probably the largest study of its kind, researchers from McGill University in Montreal recently completed a study that examined the disease progression in over 1,000 patients with Alzheimer’s disease. The researchers analyzed close to 8000 brain imaging studies and examined a number of biomarkers for Alzheimer’s disease, including brain hypo-perfusion, brain atrophy, cognitive decline, and the accumulation of beta amyloid protein. They looked at the 30-year trajectory of each of these markers in the disease and, as seen in the figure here, they showed that the very first changes seen in Alzheimer’s disease was a deterioration of the microvasculature leading to under-perfusion of brain neurons.

These vasculature changes occurred before any of the symptomatic changes in AD occurred, including cognitive decline or accumulation of beta amyloid plaques.

Can Therapeutic Angiogenesis (Stimulating the Growth of New Blood Vessels) Be Used to Treat Neurodegenerative Diseases?

FGF-1, stands out due to its potency and its ability to stimulate the production of not only capillaries, but larger arterioles, which are critical in bringing more blood into the injured tissue. FGF-1 is a natural protein contained within our bodies. It is released upon tissue injury and is the body’s natural response to tissue repair. It has also been shown to be a neurotrophic factor, which is the stimulation of new neuron growth, and this characteristic, in addition to its angiogenic properties, is being exploited for its development as a drug to treat neurodegenerative diseases.

Multiple Sclerosis as a Disease of Vascular Dysfunction

Although multiple sclerosis (MS) has traditionally been viewed and researched as an immune-mediated disease of the brain and spinal cord, recent hypotheses suggest that vascular components may be initiating triggers for the neuronal pathology seen in this disease.

In multiple sclerosis, researchers now believe that a perfect storm of genetic and environmental factors can act together on the brain’s microvasculature and the blood brain barrier, resulting in a lack of nourishment to the neurons. This dysfunctional barrier leads to the leakage of attack immune cells into the central nervous system, as shown in the figure below. 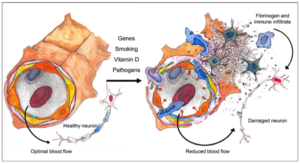 MS is a Vascular Disease. On the left, a healthy blood vessel leads to optimal blood flow and healthy neurons. On the right, multiple insults lead to disruption of the blood-brain barrier resulting in leakage of immune cells and toxic proteins (fibrinogen) which damage neurons in the vicinity

These two processes, reduced blood flow and disruption of the blood brain barrier, appear to interact in a vicious cycle, driving the destruction of neurons and the generation of focal lesions in the central nervous system, the hallmark of MS pathology. 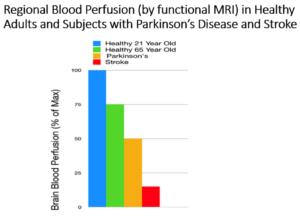 As discussed above with Alzheimer’s disease and multiple sclerosis, there is also a growing body of evidence that Parkinson’s disease is initiated by vascular dysfunction. The hypothesis is that a lack of blood flow initiates the onset of Parkinson’s disease by choking off the dopamine-producing neurons from nourishment and inefficient removal of metabolic wastes that all functioning cells in our bodies produce. Newer imaging technology (functional MRI) can accurately and with high sensitivity determine blood flow in different regions of the brain. As shown in the figure here, a recent study found that blood flow in the region of the brain that is affected in Parkinson’s disease decreases a significant 50% in patients with Parkinson’s disease (orange bar) when compared to healthy 21-year-old’s brain (blue bar). 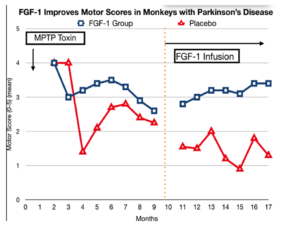 Previous work in animal models of Parkinson’s disease have indicated that growth factors such as human FGF-1 can restore motor function in both rodent and primate models of this disease. As shown in the figure here, FGF-1 administered over a period of 6 months substantially improves motor function in monkeys with experimental Parkinson’s disease. The monkeys were given Parkinson’s disease by injecting a toxin into their brains which selectively destroys dopamine-producing cells. Administration of FGF-1 to these animals results in a significant improvement in their motor skills when compared to animals who received a placebo dose, as seen in the right-hand side of the figure.

Clinical trials are now being initiated in which subjects with Parkinson’s disease will be treated with human FGF-1. Given that FGF-1 can both potently stimulate the production of both new blood vessel growth and new neuron growth in the brain, this makes it an attractive candidate to test in Parkinson’s disease and other neurodegenerative diseases.

Dr. Jack Jacobs is president and Chief Science Officer of Zhittya Genesis Medicine, a bio-pharmaceutical company based in Las Vegas that is developing regenerative biotechnology products through FDA-authorized clinical trials.

For more information about Zhittya Genesis Medicine, our medical science and our clinical trials, you can visit www.zgm.care. If you wish to speak to our Chief Executive Officer, Dan Montano, you can email him at  [email protected] or call 702-802-8373.