During the past few years, libertarians and small-government conservatives have been targeted by self-identified “conservative climate activists.” The activists claim global warming is a crisis and conservatives must come up with conservative climate solutions to counter the Climate Left. However, the mythical climate crisis does not exist, rendering proposed solutions unnecessary and harmful. Moreover, even if climate worry was justified, honesty requires that activists own up to the inescapably big-government nature of so-called climate solutions. 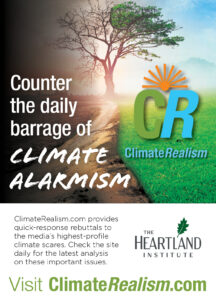 Promoting climate “solutions” requires that a climate crisis exists in the first place. To be sure, if human activity was causing a climate apocalypse, we should take pretty much whatever action would be appropriate and necessary to fix it. However, the scientific evidence strongly contradicts the notion of a climate crisis. For example, ice core data from Greenland and Antarctica show that for most of the time that human civilization has existed, temperatures have been warmer than today. Also, objective scientific data – and even the United Nations Intergovernmental Panel on Climate Change – report there is little to no evidence of any net worsening of hurricanes, tornadoes, droughts, floods, wildfires, etc., due to global warming. Instead, temperature-related mortality is falling, satellites have measured a tremendous greening of the Earth due to more atmospheric carbon dioxide, and global crop yields set new records almost every year.

But let’s assume that we want to explore “conservative climate solutions” anyway. The groups advocating such action often won’t tell you specifically what their solutions are. The reason is that action comprehensive enough to change the Earth’s climate would require more than simply planting some trees or handing out incrementally more federal pork to the wind and solar industries.

Climate Conservatives Version 1.0 promoted a so-called revenue-neutral carbon tax. Version 1.0 advocated a tax on carbon dioxide emissions so costly that conventional energy prices would go through the roof and could no longer compete against wind and solar power. To mute the protests of tax hawks, Version 1.0 claimed they would offset the economic pain of the tax hike by rebating the money government collected by enacting separate tax cuts or through direct rebates to the American people.

Here is their bait-and-switch exposed:

The entire purpose of a carbon dioxide tax is to make conventional energy so expensive that people will be coerced into exclusively buying wind and solar power, which is currently much more expensive than conventional energy. However, when that happens and people are purchasing exclusively wind and solar power, no carbon dioxide taxes are collected. Therefore, no revenue is returned to the people. The end result is our energy bills and the prices for goods and services throughout the economy go through the roof but no tax revenue is collected or returned to the American people. In reality, a carbon dioxide tax can be crafted to be revenue neutral for government, but it necessarily and unavoidably inflicts substantial economic costs and pain on American households.

Just how costly would such a tax be? According to Resources for the Future, an organization sympathetic to wind and solar power, a modest $50-per-ton tax on carbon dioxide emissions would raise gasoline prices by 22 percent, natural gas prices by 62 percent, and coal prices by 330 percent. Even so, taxes and conventional energy costs would have to go much higher than that to induce people and businesses to effectuate the goal of the tax and switch to a wind and solar economy.

In light of predictable backlash about the unavoidable economic costs of carbon dioxide taxes, Climate Conservatives 2.0 have largely dropped the carbon dioxide tax. Climate Conservatives 2.0, however, don’t offer any specific alternative plan. They ask free-marketers and limited-government conservatives to buy into the asserted climate crisis, become warriors to address “the greatest-ever existential threat to humanity,” and then trust them to later devise benign, limited-government plans that will effectively avert a climate crisis while simultaneously placating the Environmental Left.

The reality is, Climate Conservatives 2.0 know that such a plan is neither possible nor what they desire. The so-called climate conservatives are really climate chameleons. Their primary, overarching goal is not limited government – it is climate activism. Much of their funding sources and working allies are the same people and groups that fight for big-government leftist causes across the political spectrum.

Claiming to be conservatives or free-marketers is a means to effectuating their goal of eradicating conventional energy and carbon dioxide emissions. Once conservatives and libertarians have taken the bait of an existential climate crisis, then comes the switch to a leviathan of government taxes, regulations, and restrictions on conventional energy that are the only solutions acceptable to the climate establishment. And once conservatives and libertarians have joined Climate Conservatives 2.0’s clarion call of climate alarmism, they will not be able to walk it back.

People who value free-markets and limited government should first look at the full evidence in the scientific debate. Those who do so will be unlikely to fall for alarmist climate propaganda. Even those people who still worry about global warming should require self-identified climate conservatives to specify what their proposals are, show how those proposals will achieve the climate objectives they advocate, and demonstrate how those proposals will protect individual freedom while guaranteeing they do not become useful pawns of the Environmental Left.

James Taylor ([email protected]) is President of The Heartland Institute. Visit them in booth 704 and see him on stage in “The Great Climate Change Debate: Is It Real and Does It Matter?” and “The ‘Conservative’ Climate Solutions ‘Bait and Switch'” at FreedomFest July 21-24, 2021.