I’m a jazz junkie. On February 6, just a month before cruise ships were ghosted from the oceans of the world, I won my fifth crown in “Name That Tune” –among a shipload of jazz enthusiasts –on the annual Jazz Cruise through the Caribbean. The contest was hosted by clarinetist Ken Peplowski, with the Jazz Cruise musical director Shelly Berg at the piano .

At Freedom Fest this July, I’ll be talking about the centennial of “The Jazz Age.” But my main musical interest is “The Great American Songbook.” Every week I host a live radio show on KLOI,  where I curate a themed program of classic music from the 20th century.

This week I’m planning a program of songs devoted to our enforced national sequestration. I’ve searched for lyrics that fit our current situation, and I hope my listeners will chuckle a little and reminisce a little as they enjoy the music.  You can tune in live on Friday, April 10 or catch the repeat on Monday, April 13.

The program will begin with “Mountain Greenery,” a 1925 Rodgers & Hart song containing the clever lines “how we love sequestering where no pests are pestering.”

After that, I’ll segue into a dozen categories of songs, beginning with social distancing songs such as “Too Close for Comfort,” and then some nesting-at-home songs, including a rousing World War II song by Eddie Cantor with the lyrics, “We’re staying home tonight my baby and me, doing the patriotic thing.”

My baby and me
Doing the patriotic thing.
I’ve got my income-tax return to hurdle,
And she’ll be saving mileage on her girdle!

Don’t want to roam tonight,
We’re snug as can be,
Being alone is so sublime.
While I sit in my slippers, and munch a piece of fruit,
She’ll iron out the wrinkles in my Victory Suit.

We’re staying home tonight, my baby and me
Doing the patriotic thing.”

–Lyrics by Frank Loesser for the movie, “Thank Your Lucky Stars” (1943)

A more modern expression of the same idea is by the late Bill Withers: “Just the Two of Us,” followed by similar titles like “Just You, Just Me” and that perfect oxymoron “Alone Together.”

There are a wide variety of songs about wanting to travel or eat out (but we can’t). It used to be we couldn’t afford it, but now we don’t dare. A small sampling would include Sinatra’s seductive siren songs, “Come Fly with Me,” “Come Dance with Me” and “Let’s Get Away from It All.”

I’ll have a special tribute to New York and their great spirit in bearing the biggest brunt of this battle, and then songs about how our cities are closed down, with tunes like “It’s a Lonesome Old Town” and “Lonely Town” from the same Bernstein show that brought us “New York, New York” 75 years ago. Two generations will “Come Together” (if that is allowed these days) when Billy Joel and Tony Bennett celebrate Tony’s 90th birthday in “A New York State of Mind.”

Then come the Sounds of Silence: “Quiet Nights and Quiet Stars” and a gorgeous song called “Turn up the Quiet” for those suddenly quiet nights at home with no movies, restaurants or shows.

The final hour takes us back to our “Dear Departed Past” in a series of nostalgic songs by Dave Frishberg about baseball’s opening day and what “My Country Used to Be,” including a “Walk Down Wall Street,” with Ira Gershwin’s trenchant verses to songs during the Depression, beginning, “Let it rain and thunder, let a million firms go under, I am not concerned with stocks and bonds that I’ve been burned with” (the verse to “Who Cares?” 1931) or “The more I read the papers, the less I comprehend, the world and all its capers, and how it all will end” (the verse to “Our Love is Here to Stay,” the last song George Gershwin wrote before dying in July 1937).

The final 20 minutes includes five songs of hope about getting back together again, written in trying times: Frankie Laine’s “We’ll be Together Again” (1945) and Bing Crosby’s “I’ll Be Seeing You” (1944) for families split apart by war, with soldiers perhaps not coming home, then “Pick Yourself Up” and “Smile” from 1936, a Depression year, and closing with “Look for the Silver Lining” from 1919, the last year in which America suffered a killer plague like this.

This program is not archived but streams live audio from 3:00 to 6:00 pm Pacific Daylight time Friday, April 10, repeated Monday, April 13 at the same hours. Most computers can link here, but if not go to www.KLOI.org and click “Listen live” and follow the instructions to listen live. 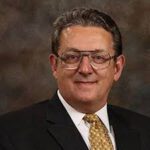 Gary Alexander is senior writer at Navellier.com, where he edits MarketMail, including his own Growth Mail column. He has spoken at every FreedomFest since its inception as FEEFest in 2002. He is a popular moderator of panels and speaker on myriad topics, including several on music. He is also a founding judge of the Anthem Libertarian Film Festival.