In President Joe Biden’s America, unions are ascendent. These political power players on the left have been biding their time for years, spending hundreds of millions of dollars to put candidates in power who will then reward them for their loyalty. And now their dreams are becoming reality.

Today’s unions aren’t the same as your grandfather’s union. The average union member today isn’t a blue-collar worker, they’re much more likely to be a public-school teacher, nurse, firefighter, or other government employee.

That’s where Americans for Fair Treatment (AFFT) comes in. We’re a membership organization that gathers independently minded public-sector employees who have been failed by public sector unions. These employees are frustrated by how their dues are spent on politics, and by unions’ aggressive lobbying for progressive policies. We help them move from union dependence – to union independence.

It’s a vicious cycle, and it doesn’t only hurt taxpayers, it hurts the employees as well.

Biden’s prioritization of the unions who elected him has been clear since day one of his presidency. Biden has met almost exclusively with union officials, has pushed for union backed proposals, and has exerted his influence to keep schools closed during COVID because of teacher unions’ demands.

The decision to allow schools to remain closed has put our most vulnerable children at risk, but Biden prioritized union demands above all other concerns.

Biden’s decision to side with teacher unions also hurt teachers, who are stuck in the middle of the battle between union officials and parents. This is especially true for teachers who did not agree with what the unions were saying. 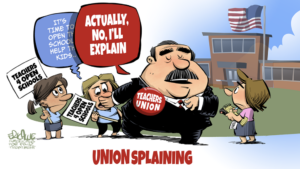 The swing to public-sector union dominance is also evident in the one-sidedness of unions’ political activity. Unions were once champions of the working class, but today they act as the fundraising and outreach arm for the left. In 2020 alone, unions spent $250 million of their members’ dues on politics, 90% of which went to Democrats or progressive causes. Unions are at the center of progressive politics.

The impact of union power can be seen in far-left states like Illinois and Connecticut. By partnering with progressive politicians to create bigger government, unions have raised taxes, leading to an exodus from these states by taxpayers and businesses to freer states in the South and West. Unfortunately, many of those fleeing big government bring the philosophies that create it with them, including support for unions.

Imagine being a public employee who doesn’t agree with the unions’ political activity, how stifling that must be. The good news is, thanks to the Janus v. AFSCME Supreme Court decision, public employees no longer have to pay fees to unions as a condition of employment. But the bad news is that these employees are stuck because of a union perk called exclusive representation – which means unions get to represent all employees in a workplace, whether they’re union members or not. These employees have no choice but to be represented by these political special interest groups masquerading as membership organizations.

Under these circumstances, public employees lose their voices and independence. 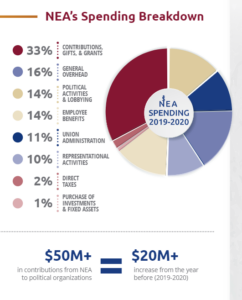 Case in point: our team at AFFT recently spoke to a Pennsylvania teacher, Bill Frye, who, several years ago, after 23 years of teaching science, ended up resigning from teaching after he was threatened by his principal with a revocation of his teaching credentials. What was his crime? He spoke out in favor of pension reform.

This teacher turned to his union for help, but the union president sided with the principal, abandoning him when he needed representation.

Unfortunately, there are few ways for public employees like Bill Frye to hold unions accountable. Unions hold a near-monopoly in the workplace, and they rarely, if ever, are challenged in decertification elections.

Here’s the bottom line: Public-sector unions are failing workers across the country. Those of us interested in preserving freedom need to continue to fight for the workers who are stuck with no choice but a bad choice.

Americans for Fair Treatment is a 501c3 community of current and former public-sector workers offering resources and support to exercise our First Amendment rights. Learn more at www.Americansforfairtreatment.org