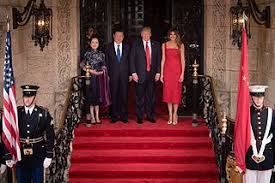 President Trump was emphatic on the campaign trail when it came to China.

He declared that he would…

… label the country a currency manipulator on “Day One” in office

…clamp down on Chinese espionage

Naturally, the mainstream media loved it.

Conflict boosts ratings and by all accounts they expected the two-day summit at Mar-a-Lago to be filled with testy sound bites and lots of earnest hand wringing.

Instead what they got was a friendly meeting, lots of smiles, and a 100-day plan to work on key initiatives that draw the two nations closer.… for reasons they can’t explain, which is why they’ve gone strangely silent on the matter.

President Trump needed to appear tough on the campaign trail. Faced with the prospect of a very different leader, President Xi needed to appear to have Chinese interests and the Chinese people, in particular, at the top of his list. So both men talked tough to their respective audiences.

If what I am saying makes you uncomfortable, I get it. This is a scary thought for a lot of people because China is an enigma. Very few Americans have travelled there despite the fact that the country “opened” more than 40 years ago.

That, in turn, means very few Americans understand who, or more precisely, what we’re dealing with. Making matter worse, an entire generation has been raised to believe that China is the “enemy” when the average Chinese has no interest in playing that role.

Unbeknownst to most investors and voters alike is the reality is that the average American family saves $1,000 a year or more by buying Chinese-made goods. At the same time, approximately 40% of the trade deficit President Trump rails against actually comes from American companies doing business there.

What’s more, China is no longer a currency manipulator hell bent on lowering the value of the yuan against the dollar, contrary to what a lot of people want to believe and what policy wonks trying to protect vested interests want to spoon feed you.

In fact, China is actually spending huge amounts of foreign reserves to buy back the yuan and strengthen it –so much so that China now meets only one of three criteria established by the U.S. Treasury needed for a country to be officially labelled a currency manipulator. If you really want to take on currency manipulators, then you’ll need to make tracks for Japan, Switzerland, Korea, Taiwan, and Germany – all of which do meet two of the three needed conditions. But that doesn’t make for great headlines.

Today, China and the United States account for approximately 39% of the global economy, a figure that has swelled as we’ve integrated our economic development over time.

There is no exit for either nation.

Fearful investors tell me frequently that China could exercise the “nuclear option” and dump trillions in U.S. Treasuries on global markets. Whoever came up with that one clearly doesn’t understand how real trading works.

There isn’t another nation in the world that could absorb that kind of liquidity. China’s currency is closely tied to the dollar, which means that dumping treasuries would devastate China’s economy.

If anything, China’s going to buy more.

China’s exports to the United States alone totaled $483 billion in 2015. That is more than four times the $116 billion in exports that the U.S. sent to China, its third-largest export market after Mexico and Canada.

Chinese and American companies have integrated over the last few decades to establish the most robust supply chains for all things, including iPhones, computers, airplanes, and more. To give you an idea, the U.S. imports more than $37 billion in just laptops alone from China. Stopping that flow would result not only in huge economic losses but also in social unrest – the one thing that Beijing absolutely does not want, and which it fears most.

Something else to consider is that the Chinese actually like the affluence that comes with wealth, so they’ll do everything they can to ensure it continues. As we have discussed many times, luxury does not recognize national boundaries any more than the hope of a better future does.

By 2030, the U.S.-China Business Council expects U.S. exports to China to exceed $520 billion, but I think the figure may be double that, based on how consistently the West has underestimated Chinese growth.

Keep this in mind.

Very few of the reporters who are spewing headlines around the Internet at the moment have spent time in China, let alone made the effort to really understand what makes its people think. Speaking on the sudden emergence of “China experts” a few years ago, legendary investor Jim Rogers observed that he found it “interesting that people who couldn’t spell China 10 years ago are now experts on China.”

I agreed at the time and still agree today. It’s entirely logical that they’ll fear China under the circumstances.

Yet, the China-U.S. economic relationship has survived Tiananmen Square, the 1997 Asian Financial Crisis, the dot-com bubble, the 2009 financial crisis, and China’s massive losses in mortgage-backed securities. It will survive the “One China” policy and concerns over North Korea, too.

Previous StoryTAX LAWS: WHAT’S DIFFERENT IN 2017?
Next StoryWHAT IT TAKES TO BE AN EFFECTIVE TEAM