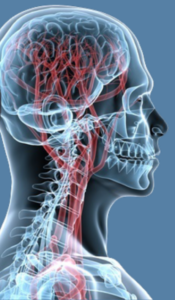 We all know our brains do not work as well as we age. Forgetting names, phone numbers and where we left our car keys are all natural consequences of an aging brain. Many medical researchers now believe that age-related cognitive decline is a vascular event and comes about as our brain neurons are slowly choked off by diminished blood flow to the brain. This diminished blood flow or blood perfusion occurs as our blood vessels become stiffer with aging or get clogged up as part of the atherosclerosis process.

Recent studies from the Columbia University School of Medicine in New York have established that as a consequence of aging, less blood flow to the brain results in a dramatically lower activity of brain stem cells. Both young and old people have pools of stem cells in their brains which act to replenish neurons in the brain as they become injured or die off. What is different between young and older people is that in the young brain there is full and active perfusion of the brain with blood; blood that brings oxygen and nutrients to the stem cells that allows them to mature into functional neurons.

This Time Magazine article includes a short video presentation that summarizes the findings from this study done at Columbia University. This video talks about how during aging, a lack of proper blood flow in the brain brings about the cognitive decline so often seen in the elderly.

The video also lends support to the hypothesis that vascular disorder and lack of proper blood perfusion is the underlying cause of not only brain dysfunction during aging, but may also be an initiating factor in a number of neurodegenerative diseases as well, including Alzheimer’s disease, Parkinson’s disease and ALS (Lou Gehrig’s disease).

The neuro-vascular unit: a critical component of brain health

The figure above depicts the neurovascular unit. One can see how larger arteries in the brain give rise to smaller arterioles and finally to capillaries, the smallest blood vessels in the brain that make up the “microvasculature” circulation and are the blood vessels that directly interact with neurons, bringing them nourishment and removing metabolic waste products. It is these capillaries that make up the microvasculature that become damaged and dysfunctional as we age and cause existing neurons to become stressed and underperforming. This same process also leads to inactivity in pools of neural stem cells in
the brain.

Angiogenesis to restore blood flow to the aging brain 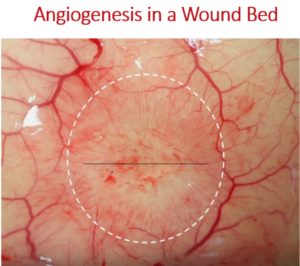 Angiogenesis, or the growth of new blood vessels, is a natural bodily process we use to repair damaged tissues or organs. For example, as shown on the left, if we cut ourselves, angiogenesis (the slender new blood vessels that have formed inside the dotted circle) is a critical step in the wound healing process. In a similar fashion, after a stroke in the brain, angiogenesis is useful in bring a renewed blood supply to damaged areas of the brain, leading in many cases to improvement in functioning after a stroke.

One of the most potent angiogenic growth factors in our bodies is a protein know as human fibroblast growth factor of FGF-1. This factor is now in clinical development to see if it can be beneficial to treat a number of human disorders characterized by a lack of blood flow to a tissue or organ, such as coronary artery disease, diabetic foot ulcers and several neurodegenerative diseases, including Parkinson’s disease and ALS, where a lack of blood flow is now believed to be the precipitating event in initiating these diseases.

Given what we now know about the aging brain, it is possible that future clinical studies could be aimed at trying to reverse cognitive decline and other brain dysfunction in aging, but otherwise, healthy individuals.

Don’t miss Dr. Jacobs’ presentation on this topic at the FreedomFest being held at Mount Rushmore, July 21-24, 2021. 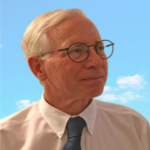 For more information about Zhittya Genesis Medicine, our medical science and our clinical trials you can visit our website: zgm.care
If you wish to speak to our Chief Executive Officer, Dan Montano, you can email him at: [email protected] or call him at 702-802-8373.