On June 15, 2020, the stock market dropped 700 points and then recovered upon the news that the Fed would be buying corporate bonds in the secondary market. It has been projected that by the end of 2020, the Fed will have purchased $3.5 trillion in government securities.

The Fed should not be buying stock. But since they are, everyone else should be running for the hills, or better yet, running toward a GCCR – a country that is 100% capitalistic and operates as a for-profit enterprise.

But more about that in a minute. First, let’s look at why it is so profoundly wrong for the Fed to be buying corporate bonds, which is also why inflation and socialism are inevitable outcomes.

A Cash Course in Inflation

First, the government does not have any money with which to “buy” bonds. . . other than the stuff they’re creating out of thin air. This devalues the currency and replicates what has been done and failed for centuries by countries and governments around the world. It’s a pretty basic economic principle that when you increase the supply of money, inflation happens and purchasing power is severely reduced.

A Lesson from Nero

For thousands of years, civilizations haven’t needed to repeatedly learn this basic lesson about the relationship between the supply of money and its decline in value. Nero, the ancient Roman emperor, illustrated this unfaltering principle to all future civilizations and governments beginning in about 60 AD.

By reducing the silver content in their coins, initially by 10%, Nero introduced the practice of devaluing currency; this practice took root in Rome and continued for the next two hundred years. As Rome’s coins lost more and more silver content, eventually going down to only 5%, the citizens began demanding more pay for their work and higher prices for what they sold. By 265 AD, the annual inflation rate was close to 1000%. Is it any wonder that Rome fell?

And, just in case this point has not been made clearly enough, take a quick look at the basic law of supply and demand. As more and more money is pumped into our economy, folks will spend it – on all sorts of good and services. But if the supply of goods and services remains the same, demand will eventually exceed supply. Products that were once plentiful become scarce, and their prices shoot sky high. Enter inflation.

When the Government Owns the Debt Default, Socialism Follows

By buying corporate debt, the government becomes the corporate owners on debt default. This is an attribute of socialism and sets the pace for more socialistic practices to be enacted.

This paves the way for the government to pay down its debt and fund its “care-taking” programs by increasing taxes on the wealthy and redistributing the funds to the middle and working classes. While consumption may increase initially, supply will wane. Imagine that! We’ve come full circle! When demand exceeds supply – regardless of its sources – inflation naturally appears.

The Only Guaranteed Hedge Against Inflation and Socialism 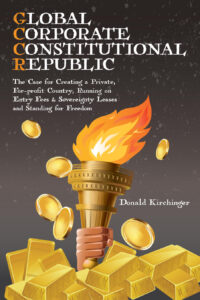 As supply in all sectors of goods and services depletes, and disposable income is extracted in the form of higher and higher taxes, the depletion of freedom follows suit. Ironically, the very resource that assures growth and prosperity disintegrates. At this point, it can’t be resurrected in the climate that suppressed it. It has to be packed up and transplanted somewhere else where it can flourish once again.

A GCCR territory or province will offer the perfect soil and conditions for freedom, prosperity, and free will to flourish. Based upon purely capitalistic principles, and operating as a for-profit business that pays dividends, a GCCR – Global Corporate Constitutional Republic – is feasible, viable, and available to all who agree on a few basic principles; most profoundly, that sovereignty is property and can be leased.