Libertarianism and feminism make fine bedfellows—though you might not know it from talking to folks adopting either label in 21st century America.

Libertarians tend to view feminism as something solely for leftists—folks always reaching for collectivist and statist solutions to social and interpersonal problems. Feminists tend to view libertarianism as a philosophy concerned with self-interest and nothing more—the exclusive province of privileged white men. But both of these viewpoints are misguided, ignoring the intellectual tradition—classical liberalism—that underlies both the libertarian movement and the feminist movement.

Classical liberalism is a political philosophy that cherishes individual rights, civil liberties, and economic freedom. It’s the backbone of America’s governmental system, (even if Americans long failed to live up to these ideals where all people are concerned).

In the U.S., the earliest organized women’s movements rallied around classical liberal principles, fighting to extend suffrage, the right to own property, and other individual rights to women. Often, they worked in tandem with abolitionists and others fighting to make America live up to its  goal of equality and justice for all. But sometimes they lost their way, abandoning these principles where expedient.

As time went on, prominent feminists began aligning with all sorts of unsavory causes (such as alcohol prohibition), moral panics, and leftist movements. And this continues today, with mainstream feminist groups and pundits pushing—no matter the problem—for more laws and bigger government.

Classical liberal feminists never disappeared, however. They just got drowned out by louder voices that aligned more with conventional left-right politics.

Throughout it all, these feminists—sometimes called individualist feminists or (more common these days) libertarian feminists—continued to advocate for equal treatment under the law regardless of sex, while also pushing back against the solutions spread by feminism’s modern mainstream. 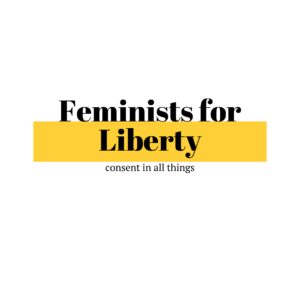 That’s where Feminists for Liberty comes in. We aim to revive the tradition carried on by the Association of Libertarian Feminists in the latter quarter of last century, and so many classical liberal leaning feminists that came before them.

As libertarian feminists, we seek to fight sexism in law and policy (no matter which sex benefits) and to push back against big-government policies enacted under the guise of protecting women.

We know that free markets and economic liberty are crucial for women’s progress, not anathema to them as many modern feminists think.

We promote voluntary solutions to ensuring the continued economic, political, and cultural progress of women, buffered by a strong belief in women’s agency and autonomy.

And we think that feminism is best when it’s rooted in choice, not coercion; consent—in all things—not force; and a commitment to treat all people—regardless of sex or gender—as individuals.

Believing people are or should be a certain way based solely on some biological factor, whether that’s sex, race, or something else, is both anti-feminist and antithetical to individual rights and flourishing. Rejecting such a practice is also foundational to libertarianism.

Sure, some people may adopt the libertarian label to push for freedom only for themselves or their in-group. But true libertarianism seeks social and economic liberty without regard to sex, race, class, religion, ethnicity, sexual orientation, politicial affiliation, or anything else. In so doing, it stands in tandem with the vision of feminism that took root in this country so long ago, and which Feminists for Liberty still stands for today. 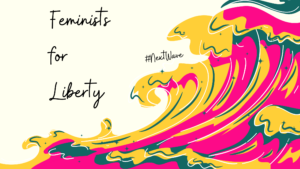 So, why do we call ourselves “Feminists for Liberty,” and “libertarian feminists”? We could just call ourselves libertarians, plain and simple. But libertarianism is concerned with many, many things. We add the feminist mantle both to signify the particular policy areas and subject matter we tend to focus on (things primarily affecting women or concerned with sex, gender, and sexuality) as well as to signal to non-libertarians that we are not anti-feminist. We care about women’s rights, progress, independence, and safety, too. But we often have different ideas about how to get there.

We could call ourselves people for liberty. But, again, that wouldn’t convey our focus on addressing things that tend to be termed “women’s issues.” And women for liberty doesn’t cut it, either, since we don’t believe feminism is just for women. Sex- based discrimination under the law and collectivist views about gender harm everyone, and we are proud to see so many men stand with us in fighting them.

Guided by classical liberal tradition, Feminists for Liberty seeks to provide a counter-narrative to prevailing ideas about what feminism is and can be, in the service of stopping the use and abuse of “feminism” to serve partisan goals, leftist politics, an ever expanding criminal code, and the bloated regulatory state.

Join us for more on these ideas during FreedomFest. We’ll be debuting the winners of our 2021 video contest during the Feminism + Freedom Film Festival on Thursday, July 22, and discussing how the criminalization of social problems backfires during a main stage panel (“Feminism Needs to Stop Calling the Cops“) on Friday, July 23. We’ll also have a table in the exhibit hall throughout the conference if you’d like to drop by and learn more.

Previous StoryMedical Breakthrough to Treat Heart Disease
Next StoryARRRR You Prepared for Attacks on Your Financial Privacy?