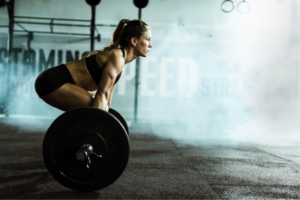 Standing on the sidelines of my daughters’ lacrosse games, I sometimes hear women talking about it in whispered voices. What is happening with women’s sports? Why isn’t anyone doing anything about it? Surely, everyone knows it’s madness to let men compete on women’s teams!

These women are right. Everyone knows that it’s deeply wrong that male-bodied athletes are now smashing records and winning competitions that are supposed to be for girls. Everyone knows that the reason we are standing there, watching our daughters play against other girls, is because on co-ed teams, the girls would be pushed aside by the boys. They would be less likely to make the team, less likely to get playing time and more likely to be injured — and therefore less likely to even try out. Our girls would get the message that their bodies aren’t good enough and don’t measure up to male bodies, fueling an already worrisome epidemic of anxiety, eating disorders and body dysmorphia.

Yes, all the parents standing there know this. But they worry that if they are overheard, they will be labeled as insensitive and hateful. They worry that common sense will be pushed aside by gender ideology – that’s why they are whispering.

The whispering needs to stop. It’s time for all of us to stand up and say what we all know to be true. The stakes are too high to remain silent. Our daughters’ futures are in jeopardy. It’s not just about sports. Women’s and girls’ safety, security and their very identity as female is being threatened.

Radical activists have been seeking – and succeeding – at erasing women as a matter of law and in our culture. Women and girls are being renamed in the most degrading ways, reduced to our body parts and biological functions. We are being referred to as “bleeders,” “birthing people” and “chest feeders.” Women are being told to share locker rooms and dorm rooms with biological males. Female victims of domestic violence are being told that they cannot have shelters of their own, free of biological males. Fully intact, convicted male sex offenders are being moved into female prisons and being allowed to prey upon the female inmates. Why? Because we have decided that the definition of woman that has existed and been understood for millennia is politically incorrect. It’s not inclusive enough. Women need to give up their safety and security so that biological males who identify as females don’t feel left out.

That puts us on our heels. Women empathize. We don’t want to exclude people, particularly those who are already hurting. Yet we must reject the false notion that kindness and dignity for transgender people can only be achieved by erasing protections for biological women. Of course, we can find ways for those who are transgender to participate in society without having to pretend that Lia Thomas deserves to be lauded as the country’s greatest female swimmer. 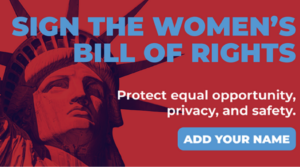 We need to reclaim the word “woman” and enshrine it into law. Women from across the political spectrum are joining together to do just that by supporting a Women’s Bill of Rights that defines sex-based terms, including “women,” “men,” “female” and “male” and affirms that single-sex opportunities can be legal and necessary when safety, privacy, and fairness are implicated.

Making this stand takes courage. Online social media mobs tar anyone who challenges the most extreme woke gender dogma as a bigot. Parents need to be ready to take that hit for the good of their daughters. Publicly support the Women’s Bill of Rights and ask your elected representatives to support codifying a biology-based definition of the term “woman” in state and federal law.

Women and girls have come so far and accomplished so much. We cannot let our daughters be sacrificed on the altar of identity politics.

Support the Women’s Bill of Rights.  Add your name at www.womensbillofrights.com.

Activate your Free Pass Membership at Independent Women’s Network  to be a part of this and other initiatives to restore common sense, civility, and freedom to our country.

Visit us at FreedomFest, “the world’s largest gathering of free minds” July 13-16 at the Mirage Las Vegas to learn more.

This op-ed appeared in Daily Caller.

Previous StoryWhat’s Wrong with Democracy? For Starters – Inflation!
Next StoryTurn Your Own Tide Toward Freedom