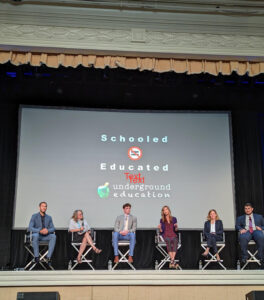 For years I have been attending both libertarian and conservative conferences on education, hoping for an opportunity to discuss truly free-market educational options. I was so grateful when FreedomFest asked me to be a guest on two panels: 1) “The School Choice Revolution: A Review on How Far We’ve Come and Where We’re Headed,” and 2) “Subversive Summit Entrepreneurs against Government Monopolies: The Real Future of Education.” The panelists were both interesting and of diverse opinions, and the moderators led rousing discussions. I learned much and really enjoyed the audience reactions, especially from attendees who came up to me wondering how libertarian leaders could endorse government funding of private and home schools through vouchers and education savings accounts. Thirty-eight years of teaching parents to reject the government’s intrusion into education is beginning to pay off.

Since 1997, Classical Conversations® has helped a million families provide a truly free-market education for themselves. I’m glad FreedomFest provides so many opportunities to reiterate what real freedom means, including the publication of this article.

That’s a problem. The federal government should have no sphere of influence on children at all. States assume that compulsory school is the same as compulsory education. High local property taxes drive families away. But that’s just the start. Government funding of education is especially insidious because money given by someone other than the recipient of a service hides bad ideas.

It’s hard to know if someone really wants a product or service when it’s given for free. Most of us would rather take a lesser service if it feels free than pay for a superior service that has an immediate cost. Services paid by taxes feel free to the recipient, and so the recipient won’t push back when these services are hitched to bad ideas.

For example, homeschooling parents receiving just a few thousand dollars in voucher money from the California legislature had to ask for more ways to officially spend the money. It doesn’t cost much to buy books, pay for field trips, and even hire some math tutors, but due to government failure, middle-class families and seniors on fixed incomes now see their regressive property taxes pay for boating lessons, airfare, and trips to Disney. Worse, homeschoolers now expect the government to pay for these amenities even as parents at public schools expect indoor swimming pools and football stadiums. Services paid by taxes encourage all of us to demand more welfare, which only leads to more bad ideas.

School Choice Is Another Name for Government Education

Educational funding is a minefield of bad ideas. Parents are presented with “choices” that aren’t really choices at all. Let’s take a look at a few “options” available to parents:

Parents don’t need a government bureaucrat to take their money and give it back to them with strings attached. Many feel vouchers are a way to provide poor parents with academic services, but vouchers are just another system of involuntary wealth distribution borne by middle-class families and seniors on fixed incomes. Like public schools, vouchers exchange a culture of hard-working families for a culture of welfare recipients.

Furthermore, money collected by the government and paid out must have oversight to avoid fraud. Therefore, all money that follows the child will be controlled by government oversight somehow. Oversight costs money, reduces available cash, and increases the power of those with oversight—people who are rarely elected officials and not easily held to account.

The government works with lawyers and banks to compel banks and employers to set up tax-exempt accounts that allow individuals to save their own money to pay for education. The hefty caveat is that this money can only go to government-accredited institutions. Private banks and businesses give up control of their potential revenue to the federal government when they take federal dollars. Meanwhile, our education is expected to be paid for by loans and tax credits rather than savings and production, funneling families into more federally approved education options.

Our country now encourages leverage and tax credits to fund our economy and shelter business profits instead of hard work and savings. We can only subsist on tax credits for as long as we can collect taxes, and then our country will be funded by debt.

Though exempt from certain state and local laws, charter schools are still funded and controlled by the government. Government-funded schools with a different name and a different level of oversight are an opportunity for crony capitalists to make easy money compared to the money required to fund a private school. The very definition of injustice is to favor one citizen over another.

These schemes are traps. Anytime someone has a successful idea, people in power want in on it, first in the form of support and then in the form of control. Soon, the funders’ ideology takes precedence. That’s why the C in YMCA no longer truly stands for Christian, why United Way is only united around more government support, and why the GI Bill is used to encourage even more special interest groups to demand free university. Receiving one-time government money with no strings attached makes the second, third, and fourth times easier with strings attached. With the shekels come the shackles.

The Cure Is the Constitution

What does that mean for us? It means the best way to protect our educational freedom is to insist upon the proper observance of our constitutional rights. Consider the activists who want schools to fail for socialist reasons. Socialists do not like free markets or local autonomy, even school boards, and seek to federalize all education, eradicating personal decision. These activists attempt to bypass constitutional conventions, where it is intentionally hard to do much damage. We can curtail their plans by insisting upon strictly observed, constitutional legislation.

We must also resist the temptation posed by government funding. Many well-meaning, conservative law firms help interest groups, even Christian schools, receive government funding under so-called “equity arguments.” Life is not equitable. Lawyers’ time and money would be better spent on removing unconstitutional laws than encouraging an impossible utopia of equity.

We should work to advance principles of freedom rather than try to fix a socialist system of education. Let’s eliminate all forms of government funding of education and be free indeed!

Previous StoryLessons from a Venezuelan Refugee: Socialism is Not the Answer
Next StoryBeware: The Government is Stealing People’s Homes