Hong Kongers have been protesting since Hong Kong rejoined China in 1997, but since March 2019 these protests have increased until they have at times included 26% of the entire country’s population . On June 30, 2020, China passed the Hong Kong National Security Law , and on July 29, 2020 officials started arresting and imprisoning protesters, starting with 19-year-old Tony Chung. With Hong Kongers no longer being allowed to talk openly about government oppression (remember Tiananmen Square in 1989 ), Hong Kong’s protests suddenly and unceremoniously came to an abrupt end. I personally had online friends from Hong Kong whom I haven’t heard from since these arrests began, and their accounts have disappeared or gone eerily silent. Few people from Hong Kong seem willing to talk online about what is going on there, now that doing so could get them arrested.

In response to this situation, the United Kingdom offered 2.9 million of Hong Kong’s 7.5 million residents a permanent home in the UK, resulting in increased housing demand there. Concerned that China is starting to restrict Hong Kong exit visas as it has already done with mainland China, many of the remaining 4.6 million Hong Kong residents (who don’t qualify for the UK’s offer) are actively looking for options to flee what was once the most economically free country in the world.

But Hong Kongers have a secret weapon: they have shown that they can produce great wealth even while living on an island mostly devoid of natural resources. In the past, Hong Kongers’ secret weapon was that they adhered to free-market principles , which gave them the power to prosper anywhere in the world as long as they had the freedom to supply what the market was willing to pay for. But Hong Kongers’ ability to create wealth was not tied to the land that China has reclaimed; it was tied to their understanding of those free-market principles. Even today, they could recreate their past wealth under a “New Hong Kong” elsewhere—if they had the same high levels of economic freedom.

Where to go for Economic Freedom?

However, there is another option that is often overlooked and largely left untapped: Seasteading. We’ve had the technology to build floating cities offering freedoms that can’t be found anywhere else out on the high seas beyond the EEZ for decades. For example, this is essentially what mega container ships are, except that their space is being used for cargo, not as living and industrial space.

Why haven’t those who desire economic freedom already taken advantage of the technology available and built an independent, economically free, seasteading nation? I believe it is because life on a seastead is different from life on land. For one thing, space is more expensive. In addition, those who believe that life on the high seas should be like a Caribbean cruise are put off by the knowledge that unless they have the money to make it so, everyday life on a seastead won’t resemble the lifestyle of the rich and famous. It will be more similar to what sailors on a naval ship or astronauts on the international space station experience. Living space will be at a premium and people will be there to be industrious and to prosper, not to have a vacation (although medical tourism will probably be big).

This, again, is where Hong Kongers have a unique advantage. As expensive as life is on the high seas in per-square-meter rental costs, it is about on par with what Hong Kongers are currently spending per square meter per month anyway , since Hong Kong is one of the most expensive cities in the world ). So the people of Hong Kong who choose to move to a “New Hong Kong” seastead floating city could continue to spend about the same each month (or less) on rent per square meter as they are today. Plus without a government regulating housing, people are free to make better use of their own space . 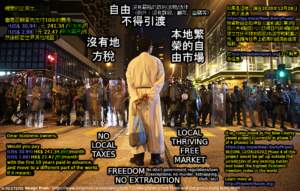 The United Nations Convention on the Law of the Sea (UNCLOS) gives countries authority to regulate all vessels within their Exclusive Economic Zone (EEZ), defined as 200 nautical miles (370.4 km or 230.16 miles) from shore – or farther if their continental shelf reaches beyond that point. But as long as you are outside the EEZ , are flying a flag of convenience that the International Maritime Organization recognizes, and have NOT signed the International Seabed Authority treaty, then you are beyond the reach of any existing country’s legal jurisdiction except for those maritime regulations of the country’s flag you choose to fly. This means that a floating city outside the EEZ could provide Hong Kongers with all of the economic freedoms Hong Kong had previously enjoyed, and Hong Kongers could prosper outside China’s jurisdiction in a New Hong Kong.

Some shipyards are now producing the highest space capacity for the lowest price container ships in the world’s history (adjusting for inflation). With the COVID19 pandemic reducing demand, many shipyards are desperate for new customers , making today an ideal buyer’s market in manufacturing floating structures. China has announced plans to completely take-over of Hong Kong in the next 5 years, so the need is urgent, the technology is available, and the price per-square-meter–while still high– is the lowest it has ever been. The time is now for those who are willing to step boldly into this new frontier to claim a better future of economic freedom for both themselves and their children.

A call to Action: How You Can Participate in Freedom Haven’s Seasteading Project

The FreedomHaven.org’s seasteading project plans on building a New Hong Kong in the Bay of Bengal (or other desirable location) outside the legal reach of China or any other existing country (beyond the EEZ). Freedom Haven’s Constitutional government, will have the highest level of economic freedom available in the world today.

Help us raise $20,000 for the construction and testing of our 1:87th scale detailed prototype. Then stay with us all the way through the remaining phases of the project to the final structure, which will provide 585,000 square feet (54,348.28 square meters) of modifiable space for people to live and work in, at a price that should be cheaper per square area than current Hong Kong prices. In the future, multiple vessels can be added and combined for near infinite expansion potential. Investors will be able to lease space for themselves or others. 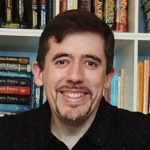 Anthony Charles Olsen is Senior Architect of FreedomHaven.org and its open-design “New Liberty” seasteading city . As a child and young adult, he spent a total of 6.5 years living in Germany (two of which were in former Socialist/Communist East Germany) and traveling throughout Europe. There he witnessed what government oppression does to a people and began to understand the importance of freedom and the poverty that results from not having enough of it. Tony is a software developer, longtime Austrian economist, and has spent years studying concrete, ship building, metallurgy, 3D modeling, international law, and anything that could be helpful in designing the planned seasteading community.

Previous StoryGalt’s Gulf: Seasteading’s 2021 Frontier for Freedom
Next StoryFreedomFest Moves to the Land of the Free and the Home of the Brave