Many Christians in America – on both Left and Right – have been grasping for power instead of standing up for the principles that enable human flourishing. They have fallen prey to the allure of the status, privilege, and power granted by an institution that the Church has historically viewed with suspicion. Worse yet, many Christians have lost the ability to think straightforwardly about the world without importing an agenda driven by the desire for political power. As pastor Brian Zahnd says, the world is “addicted to solving its problems through violence.” A truly Christian political philosophy includes embracing just means toward just ends, and violence is never the answer.

Persuading Christians to be against empire and, therefore, against the state is the #1 pursuit of the Libertarian Christian Institute, a federal 501(c)(3) nonprofit that makes the Christian case for a free society. We are convinced that libertarianism is the most consistent expression of Christian political thought. LCI is ecumenical in nature, welcoming all those who confess the traditional creeds of the universal church. Christians and libertarians of all types visit Libertarianchristians.com to read about Christian libertarianism, find answers to common objections, and meet others committed to the same values.

LCI is the #1 Resource for Libertarian Christians

The Libertarian Christian Institute has an online presence for Christians that is unmatched in the libertarian community, including hundreds of original articles, book reviews, videos, podcasts, news reports, and social media communities.

Theology matters, and so does interpreting the Bible in the best way we know how. Christians often object to libertarianism on the basis of Romans 13 or Matthew 22 — that we should “submit to the powers that be” and “Render to Caesar that which is Caesar’s.” Some Christians even believe (quite erroneously) that the early church was an example of socialism! We completely reject and vigorously argue against such erroneous interpretations of scripture.

Why you should attend our breakout session about Christianity and libertarianism 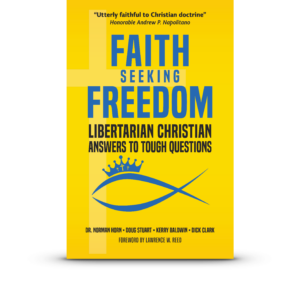 At our FreedomFest breakout session, co-authors of the book and key figures from the libertarian Christian movement will discuss some of the toughest questions Americans face today about how Christians can, in good faith, offer libertarian solutions. Below is a taste of the topics we’ll be discussing.

Why do Christian political movements in America repeatedly fail to capture the foundations of a free and flourishing society?

Modern Christians often miss the explicitly political language of the New Testament. The phrases “Jesus is Lord” and “Son of God” were, in Jesus’ day, an affront to Caesar. It was Caesar who rode into cities on a war horse demanding people’s allegiance, promising an age of peace won by violence. In contrast, Jesus came promising the life of the age to come (“eternal life”) through faith in him, a peace that was not won through violence, but through the forgiveness of sins and allegiance to him.

To give allegiance to Jesus Christ is to strip Rome (and by extension the modern state) of its power, prestige, and authority. This is how the gospel directly challenges the state and to its power.

What does human flourishing look like from a libertarian Christian perspective?

So many Christians have clearly become obsessed with political power as a means to achieve justice, national unity, or some vague notion of the common good. In the aggressive push to dominate and force either gradual or revolutionary change, they’ve abandoned the principles of voluntarism and peaceful non-resistance to violence. In short, they’ve traded non-violence for violence, which results in slavery for most and the creation of a privileged and well-connected elite.

We believe that a free society is the best means to human flourishing, on both utilitarian and moral grounds. Humans were made to be free from oppression. To set every human free is to unleash upon the world the capacity to innovate and improve the well-being of all people. It is only by beginning with freedom that human flourishing is even possible.

Why has society failed to reconcile the rights of women and children?

In the wake of Justice Alito’s draft opinion on Dobbs vs Mississippi, concerns about the rights of women are at issue once again. At the same time, questions about the rights of children hang in the balance. “In the name of the children” is the cry of the tyrant. Tyrants will persist, and society will continue to fall for it, until we reconcile the issues surrounding this important issue.

It’s time to resolve, once and for all, the perceived conflict that exists regarding the rights of women and children. If we do not, we will be at the mercy of the tyrant who feigns concern for both when it suits their agenda. The old, tired, conventional debate on abortion has failed to bring clarity to these issues. Libertarianism is poised to provide a solution.

Articulating human rights through the lens of property rights clarifies and disambiguates human rights. Toward this end, no theory of human rights can be valid if it compromises the rights of half the world’s population and their offspring. We contend that resolving the property rights concerns between women and their offspring is the final hurdle in the centuries old battle in a full, comprehensive, and accurate theory of rights.

What are some of the most important economic and monetary questions facing us today?

Money itself is not the root of all evil. Despite a growing animosity toward monetary profit, even from the Christian right, we believe honest money is sound money. The manner in which the US dollar has been managed has been anything but honest. Sound money and voluntary, mutually-beneficial exchange is core to the biblical conception of justice.

The creation of money is like the evolution of language. Sound money requires a community. “No thing is in itself money,” said Carl Menger, “because, for example, of its material and its technical or external form, let alone because of mere acts of will of rulers.”  No economic good can be a generally accepted medium of exchange just by its properties.

Sellers accept it as payment. Economic goods can become money for the sellers and, therefore, for their customers. Money, like language and even social media, is a network good.

The creation of money is a product of spontaneous order in a given community. It has never been a creation of government, or even of bankers. It’s a creation of the community. Individuals trading within that community, using money, are making it sound through voluntary, mutually beneficial exchanges.

Libertarian Christians firmly acknowledge that money as an end in itself is sinful and damaging. It is not wrong, however, to seek more money because you have very little and need to make ends meet, or because you wish to provide meaningful work for others. Money, when used as a tool,  requires wise stewardship.