The National Popular Vote interstate compact will guarantee the Presidency to the candidate who receives the most popular votes in all 50 states and DC.

It will apply the one-person-one-vote principle to presidential elections. Why is this necessary?

Campaigns are concentrated in a dozen closely divided battleground states 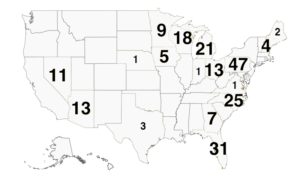 Under the current state-by-state, winner-take-all method of awarding electoral votes, presidential candidates fashion their platforms and campaigns around the concerns of voters in closely divided battleground states. A dozen battleground states received virtually all (between 94% and 100%) general-election campaign events in the last three elections. For example, in 2020, 12 states received 204 of 212 of the general-election campaign events (96%).  The map shows the number of campaign visits to each state.

A nationwide vote for President will ensure that every voter, in every state, will be politically relevant in every presidential election.

In the 2020 election, margins of 10, 12, and 21 thousand votes in the closely divided battleground states of Georgia, Arizona, and Wisconsin decided the Presidency.  That is, out of 158 million voters nationally, less than 45 thousand decided the outcome.

Similarly, 78,000 votes scattered among Pennsylvania, Michigan, and Wisconsin decided the Presidency in 2016.  In 2004, if 59,393 voters in Ohio had changed their minds, President Bush would have lost, despite leading nationally by over 3 million votes.

In the past 20 years, three states that had been solidly red for decades (Colorado, New Mexico, and Virginia) became so blue that both parties ignored them in 2020. This same blue shift turned an additional four formerly red states into hotly contested battlegrounds (Arizona, Georgia, North Carolina, Florida). Meanwhile, formerly red Texas slipped from 62% in 2004, 58% in 2012, and 55% in 2016, to 53% in 2020.

Current system does not increase clout of small states 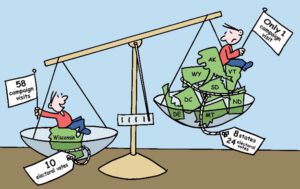 Far from increasing the political clout of low-population states, the current state-by-state, winner-take-all method of awarding electoral votes actually extinguishes their influence. The reason is that political power in presidential elections comes from being a closely divided battleground state, and only one of the smallest states (New Hampshire) is even arguably competitive.  As a result, only one general-election campaign event (out of 1,164) was held in the eight smallest states (i.e., those with three electoral votes) over the entire period of four presidential elections between 2008 and 2020.

In comparison, Wisconsin (which has the same number of people as the total residing in the eight smallest states) received 58 visits.

If the six million voters in the eight smallest states had been located in one state, they would have been closely divided in all four elections, and they would have gotten as much attention as Wisconsin.

The U.S. Constitution gives the states exclusive control over the choice of method of awarding their electoral votes—thereby giving the states a built-in way to reform the system by means of state legislation. Article II, section 1 says:

“Each State shall appoint, in such Manner as the Legislature thereof may direct, a Number of Electors….”

The shortcomings of the current system stem from state “winner-take-all” laws that award all of a state’s electoral votes to the candidate receiving the most popular votes in each separate state. These state winner-take-all laws are not in the U.S. Constitution. Winner-take-all was not mentioned at the Constitutional Convention or in the Federalist Papers.

The National Popular Vote interstate compact will take effect when enacted by states with a majority of the electoral votes (270 of 538).  Then, the presidential candidate receiving the most popular votes in all 50 states will get all the electoral votes from all of the enacting states. Thus, the candidate receiving the most popular votes nationwide will be guaranteed the Presidency.

Under the National Popular Vote law, no voter will have their vote cancelled out at the state-level because their choice differed from majority sentiment in their state.  Instead, every voter’s vote will be added directly into the national count for the candidate of their choice.

The National Popular Vote law is a constitutionally conservative, state-based approach that retains the power of the states to control how the President is elected and retains the Electoral College.

Learn more about the National Popular Vote at FreedomFest, “the greatest libertarian show on earth,” July 13-16 at the Mirage Hotel in Las Vegas.