Self-determination, in terms of American independence, meant freedom from control and manipulation by an elite class in England that did not have the best interests of the American people in mind.

When the internet was first developed, people believed it would deliver them greater freedom than ever by providing equal access to information, along with the means to share information—to communicate. At first, it did. During the 1990s and early 2000s, regimes that had built their power by controlling access to information and using propaganda to control and manipulate their people collapsed one after the other.

Tragically, these tools of freedom were soon turned inside out by mobile operators and technology companies eager to profit by monitoring people as they used the internet and wireless technologies. By 2010, the internet was no longer about empowering individuals to communicate freely and share information. It had become all about collecting information on everyone using the internet—what they were looking at, who they were talking to, and what they were saying. 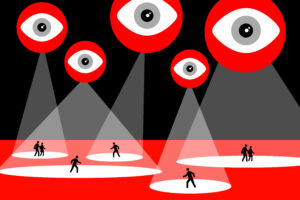 Over the next decade, a collection of technology companies, mobile operators, and government agencies—a group we now think of as “Big Tech”—perfected a new business model: Surveillance Capitalism— providing “free” or cheap services to consumers in order to collect unlimited data on them, analyze that data, and then use that data to control and manipulate them in ways that would be difficult for them to even notice.

At first, this manipulation was relatively benign—showing a user an advertisement related to a product he had searched for. Over time, though, with the development of AI-driven analytics and psychology-based algorithms, Big Tech began classifying people into groups by their physical characteristics (age, gender, race, etc.) and by their beliefs. And based on these classifications, Big Tech began sharing certain information with some of these people and withholding that information from others. By manipulating access to information, Big Tech managed to fragment society and pit those fragments against each other. Conservatives vs. liberals.  Gun-rights advocates vs. gun-control advocates. Young vs. old. Defund the Police vs. Law and Order. Why would they do this?

Are you really being manipulated, used, then monetized by Big Tech? You betcha. You may have joked with someone that you “probably shouldn’t have said that on the phone,” after commenting in a particularly spirited way about a politician or an edgy idea or a deeply held conviction, but it’s no joke. Your calls are indeed being monitored, like everything else you do with your mobile phone. And because of this, we have all begun to self-censor.

This self-censorship is one of the most dangerous aspects of Big Tech’s eavesdropping and tracking. If we are frightened to say what we think, we will soon stop thinking it. If we are worried about reaching out too many times to the “wrong people,” we will eventually stop freely associating with others. If we automatically second-guess whether to write something in an email or a text, we will write inoffensive, careful, watered-down words that no longer convey the depth of our beliefs and passions.

This isn’t some dystopian, outlandish tale. Even the novel 1984 and the movie The Matrix don’t seem so much like fiction anymore. Life is imitating art in terrifying ways. Those who don’t feel it, don’t see it, and don’t fear it are in denial about what’s actually happening.

What I am sharing with you now won’t sit well with many in the ruling classes. Just like the despots of old, they want to control and manipulate you into becoming no more than an unthinking, disempowered, revenue-generating automaton, focused on shopping for the latest form of material satisfaction, while tearing each other down based on whatever the elites have determined should be the latest propaganda—racism, the environment, social justice, etc.

So what to do? Act. I founded Volta Wireless to bring freedom back to the internet, to empower everyone to communicate and share information freely without having to worry about Big Tech tracking their every move. Others, who feel as I do, are fighting back via their areas of specialty. Because, maybe, if we don’t allow Big Tech to track us, then they won’t be able to control and manipulate us. And then maybe we will be able to begin to find some common ground and start making the world a better place—together.

David Sinclair,  founder of Volta Wireless, will be speaking at FreedomFest, “the greatest libertarian show on earth” July 13-16 at the Mirage Hotel in Las Vegas.

Previous StoryLearn Economics, Then Vote Smart
Next StoryWhy a National Popular Vote for President Is Needed