I’ve never called COVID-19 a “hoax” or thought that it was “just the flu.” I criticized the Erickson video, and I didn’t bother to watch Plandemic. But I’ve been publicly skeptical of most dire coronavirus predictions since the beginning. I’m also extremely concerned about panic-based policy overreactions.

This has put me at odds with many friends and acquaintances, and it’s required me to confront a surprising amount of animosity — often from people who have been quick to pounce on any perceived inaccuracy from critics, while seeming to be utterly unconcerned with accepting the most terrifying predictions as fact, even though most have been based on extremely unreliable models and some of the most poorly collected data imaginable.

“I have a thread filled with doom and gloom. Literally millions are going to die, or so I’m told, within the next few months. Two months, in one person’s opinion. In a year and a half, most of the world is going to have contracted [a severe case of] the disease.

These are actual claims.

People accused me of “caring more about money than human lives,” “wanting people’s grandmas to die,” and other lovely things. A couple weeks later, in response to one angry critic, I laid out my own (entirely powerless) suggestions for an alternative policy path besides devastating economic shutdown.

These are the bullet points:

We’ve always known that COVID is primarily a danger to elderly people and those with compromised immune systems, so what’s always made sense to me was to focus all of our efforts on protecting individuals who actually had a high risk of dying of the disease, while allowing young, healthy people to continue producing goods and services so that the pandemic didn’t turn into a new Great Depression.

Part of my point was that the people who wouldn’t be likely to survive the virus needed the rest of us now more than ever. Not cowering in our homes, but out making the goods and services that keep the world’s standard of living moving up, driving extreme poverty down.

They need us to do this precisely because they can’t. And if none of us are doing it, we’re all dead.

That’s not an exaggeration.

The big “secret” of economics is that the spontaneous, daily interaction of billions of people all over the world is the key to prosperity. Life does not sustain itself by magic. It takes work… And the best way to do it by far is through specialization and trade inside a system of robust property rights, entrepreneurship, and economic freedom.

I just released a new video in my Out of Frame series that gets to the heart of this point.

We Set The Economy On Fire. Now What?

I argued that shutting down the economy, locking people in their homes, allowing the government to decide whose businesses were or were not “essential,” and paying trillions of dollars in unemployment and welfare was not only a radical and likely-ineffective way to deal with the disease we were facing, it would also create a thousand more problems which almost no one was remotely prepared for.

The response I got from the doomsayers? RIDICULOUS!

According to the people who believed millions would die without immediate and exceptionally draconian action, it was insane to target our efforts towards protecting a comparatively small group of people who actually need to be isolated while leaving everyone else free to make their own judgments about their relative risks.

Meanwhile, these same people had zero concerns about the practicality, effectiveness, or long-term consequences of strictly policing the actions of 330 million people at a one-month cost totaling more than the annual Federal budget, off-the-charts unemployment, the devastation of small business in America, and a tsunami of major problems just now starting to become visible — including food shortages, medicine shortages, and increases in death from starvation, untreated illnesses like heart attacks and tuberculosis, and suicide.

Unfortunately, the doomsday brigade got their wish.

We let bad data and scary models lead us to lock down huge segments of the economy, impoverishing tens of millions of people and creating a spike in unemployment worse than we’ve ever seen.

We tested almost no one.

The FDA and the CDC actively stood in the way of adequate testing. The first outbreaks in Washington state were actually discovered by labs that had to skirt the rules to do their jobs.

The bigger problem with this is that the only people who did manage to get tested for coronavirus were severely symptomatic patients whom doctors strongly suspected were infected. This means that the “confirmed” data was strongly skewed towards presenting the virus as much more deadly than it is. As terrifying as this was for most people glued to the TV, it actually left us utterly blind to both the true extent of the spread and it’s actual severity.

Even now, the CDC has failed to produce a single large scale, randomly sampled study that would help us understand the disease. Universities and state and local governments are only just now starting to conduct antibody tests, and as they do they’re finding that the disease is way more widespread and far less deadly than we were led to believe.

Even the government’s attempt at expanding hospital capacity has been shockingly incompetent — lying to the public, taking critical resources away from poorer states to stockpile in wealthier ones, and setting up multi-million dollar field hospitals in cities across the US that are now shutting down without treating a single patient.

They couldn’t even get welfare right.

In spite of approving a massive, pork-filled spending bill with essentially no debate at the end of March, millions of unemployed people are still waiting for the support they were promised while  their “temporary” furloughs become permanent layoffs. And thanks to the IRS, even the companies they used to work for that got emergency loans may go out of business anyway.

The models were wrong, and the evidence favoring lockdowns is weak.

Recall that the whole point of shutting down the economy was to “flatten the curve.” 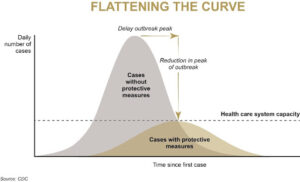 It makes some sense… And in spite of the government failures piling up, we’ve seen significantly fewer deaths than the models predicted. Hospitals weren’t overrun.

No doubt many people think that we succeeded in flattening the curve because lockdowns worked as planned. Problem is… There’s actually little to no correlation between the speed and severity of lockdowns in different states and countries and their hospitalization and morbidity rates. What’s more, countries like Sweden that didn’t mandate a lockdown at all didn’t come close to overwhelming their health care systems.

In fact, in New York City right now, according to Governor Cuomo, the majority of new cases are coming from people who were staying at home.

The evidence just doesn’t support the idea that strict lockdowns had much positive benefit.

Coronavirus is burning through nursing homes.

Perhaps the most shocking problem of all has been the utterly mind-blowing failure to protect the very people who needed it the most. A massive percentage of the deadliest COVID-19 outbreaks all over the United States (and around the world) have occurred at nursing homes. 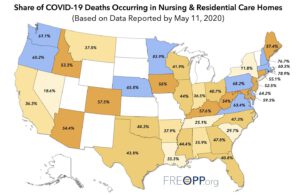 Worse still, politicians in New York, Pennsylvania, and other states maintained laws that required nursing homes to accept symptomatic, contagious individuals even though they knew their facilities wouldn’t be able to sufficiently isolate them from healthy residents.

We couldn’t have done a worse job of protecting our most vulnerable population if we’d tried.

Instead of marshaling resources and setting up systems to help isolate and contain outbreaks in nursing homes (for example, by segregating populations into smaller groups; regularly testing staff; providing adequate PPE; etc.), virtually all of our attention has been focused on making sure perfectly healthy people aren’t allowed outside.

It’s time to end this madness.

I can’t fault most people for getting this wrong. Predictions are really hard, and trying to figure out what’s going to happen in the wake of a viral pandemic isn’t something any of us is going to do well — including the experts.

My most glaring failure was making an early guess that the US death toll would not be more than 10,000 by May. At the time I said it, the US had only seen a few deaths and we mainly only had data from China, South Korea, and Italy. I gave China’s claims of relatively low deaths too much credibility and I foolishly expected the US to behave far more like South Korea than it did.

But on balance, I can look back on most of what I’ve said in the last three months and stand by my core arguments.

The most publicized epidemiological models were not only wrong, but dangerously so. Government and news media wildly overstated the risks of COVID-19 and people’s fears led them to support policies that we’ll all regret for years… maybe even decades to come.

“Freedom vs. Fear: Which Side Are YOU On?”

We’ve somehow failed to protect the people with the greatest risks of dying of a viral infection while utterly destroying the global economy.

It’s baffling, and maddening, and we need to regain our sanity.

The world will never be perfectly safe. There will always be risks. But we can’t all live in a bubble. The longer people are prevented from going to work, interacting with each other, creating the flow of prosperity that sustains our lives, the less likely we’ll be able to fully recover. Ever. We may have already broken the world.

It’s time to open up. 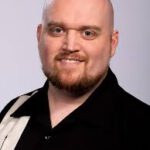 Sean W. Malone is the director of media for the Foundation for Economic Education. He produces FEE’s “Out of Frame” and “Common Sense Soapbox” series, which have been viewed tens of millions of times and earned FEE a Silver Play Button award from YouTube. Several of Sean’s short documentaries have won awards at the Anthem Libertarian Film Festival, which is part of FreedomFest, “the world’s largest gathering of free minds,” this season. He will be speaking there this season.