The most dangerous “truism” for individual investors is that buy-and-hold investing is the best investment strategy to use. It’s especially dangerous for investors wanting to retire. Take a moment to educate yourself.

If you’re an investor in the stock market — and who isn’t these days — with the proliferation of mutual funds and self-directed retirement plans such as 401k’s and IRA’s, you’ve heard that buy-and-hold is the best strategy to use because after bear markets end, “everyone knows the market always comes back.”

Isn’t that great? Now all you need to do is go back in time, take your 2022 dollars and invest $100 in the stock market 97 years ago. Fire up your DeLorean and it should be easy.

Mark Twain could have been talking about buy-and-hold when he used the phrase “Lies, damn lies, and statistics.” There’s nobody alive that invested $100 in the stock market at the beginning of 1925.  But it sounds great when they tell you about it.

By the way, if you’re super wealthy and never need your investments to provide you and your family with income and growth for the future, you can stop reading now.  This article isn’t for you.

Here’s the reality for most people. At some point in time, you’re going to need your investments to help you live. You worked hard for 30-40 years saving and investing your money for retirement, to help your family, and maybe to leave a legacy for your church or community. You can’t afford to lose 50% of your nest egg.

This is what the buy-and-hold “experts” forget to tell you. They’re so wrapped up in their historical numbers that they don’t realize you have real-life goals with the money you’ve built up.

By the way, you know who guarantees you that you’ll lose 50% or more? The king of buy-and-hold himself, Warren Buffett. Buffett, in his 2017 shareholder letter, commented on historical Berkshire Hathaway losses of 59.1%, 37.1%, 48.9%, and 50.7%. He wrote, “In the next 53 years our shares (and others) will experience declines resembling those in the table. No one can tell you when these will happen. The light can at any time go from green to red without pausing at yellow.”

That’s why I would never subject my clients to those types of losses. It’s not just a financial loss.  The emotional toll is just as devastating.

I prefer to follow Buffett’s advice with his two investment rules:

I use a mathematical approach to investing in the stock market. It’s called trend investing. It’s definitely NOT market timing. And it’s not buy-and-hold either.

Trend investing has a simple concept: The markets are constantly moving between bullish trends and bearish trends. It doesn’t matter which way the trend is moving; it’s possible to make money in both uptrends and downtrends.

Trend investors risk only a small percentage of capital on each trade, and every trade has a pre-determined exit strategy. This way, a sudden move against us will not cause us to lose much.

As a fiduciary, it’s my obligation to protect clients from losing large amounts of money that could negatively affect their lifestyle. Every trade is not a winning trade. But the losses are always small and manageable.

Here’s a real-life example of a situation I’m currently working on. Some of the personal details have been changed for anonymity.

I was approached by a person three weeks ago with a difficult problem. He wanted to retire from a large, publicly traded company (top 75 market cap in the S&P 500). At the beginning of the year, he had more than $3 million in company stock and retirement plans. It was about a 50/50 split between the two. This had been accumulated over more than two decades. He felt he could retire comfortably. When he looked at his June statement, he was shocked that the account value was down to $1.6 million. He had lost $1.4 million in just six months.

He doesn’t know if he can afford to retire. If he does retire now, he’s going to have to accept a lowered lifestyle for the rest of his life! And if he doesn’t retire, it could take several years to just get back to where he was less than eight months ago.

Here’s a chart of the exact stock he owns.  This chart is from the proprietary trend-following software that I have developed over the past 2 decades.  The black line is the week-closing price for the stock over the past three years.  The red line is the result of the trend-trading. The numbers speak for themselves. Over the past three years, buy-and holders have lost -5%, but my trend-following system would have gained more than 150%. 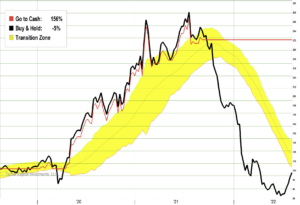 This chart represents the years and partial years indicated on it. The black line represents the week-closing price for the stock over each year. The red line represents the result of trend-trading over the same time periods. The yellow band represents market volatility. This chart is provided for informational purposes and should not be relied upon when making any investment decision.  Provided solely for illustrative purposes. Actual results may vary. Source: Turner Capital Investments, LLC.

Take a look at the red line during the 2020 bear market. Once the exit was hit, he would have gone to cash and gotten back in shortly after the stock started moving back up. The stock had a nice uptrend through the beginning of 2021 when it began to falter. My system would have kept him in the stock because it never violated its normal level of volatility. It finally did fall off, and in September we would have gone to cash.

“Well what about taxes Mike?  He would have had to pay taxes by selling the stock.”  That’s a constant question I get from the buy-and-hold crowd that focuses on the wrong thing. Would it have been better for this gentleman to have sold his stock and paid taxes on the gains or for him to hold it all the way down into its current losing position?  The numbers speak for themselves.

I don’t know what’s going to happen in the future. Nobody does. But I do know this… I won’t let my clients lose a life-shattering 50% because of a buy-and-hold philosophy that doesn’t take investors’ needs into account!

Both times, the markets dropped 50%, recovered, dropped sharply again, and finally got back to where they started. That’s what we could be facing with the economy right now. High inflation, a confirmed recession, the world economies breaking down. Maybe it won’t matter and the markets will continue to move higher.  But maybe not.

The best way to take advantage of whatever will happen is to always be on the right side of the market. That’s what I do. If you want to read my weekly newsletter, you can sign up here.  Each week, I show you the charts I use to make investment decisions and tell you my investment plans for the upcoming week. I’m completely transparent in what I do for my clients.

Don’t let the siren song of buy-and-hold keep you from doing the right thing, for you and your family’s economic security.

Yours in financial freedom,

Mike Turner’s background is engineering (Civil), computer science, and finance.  He is the primary architect of the science, algorithms, and math behind the analytical software systems used at Turner Capital. He is a disciplined and formulaic investor who relies heavily upon these software systems.  He is the portfolio manager for several hundred individual investor clients and oversees multiple portfolio investment strategies that range from high income producing portfolios to strategies that are designed to grow capital in both bull and bear markets.  He is not a typical buy-and-hold advisor but positions his clients to take advantage of both bull and bear market cycles.
​
Mike is the author of the very popular books, “10-The Essential Rules for Beating the Market” and “Rule 1 of Investing“.