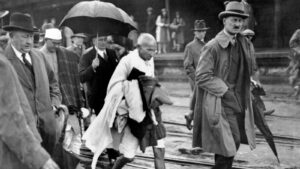 Gandhi was onto something when he said: “If we could change ourselves, the tendencies in the world would also change. As a man changes his own nature, so does the attitude of the world change towards him. We need not wait to see what others do.”

And then he personally applied that principle to his actions with enough intention and consistency to change an entire nation.

The battle in this nation is on.

And it’s not just the battle over political policies anymore. The battle is over the battling itself. Politicians and leaders who now spout the word “unity” to “combat” the “divisiveness” that has gripped our nation more and more tightly have little intention of actually fostering such a thing as “unity.” The only unity that matters to them now is agreeing with them 100%! 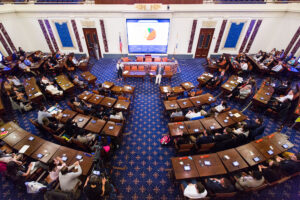 Let’s face it: The stakes have become too high. Government has become so big and so powerful and the financial stakes so high that neither major political party feels it can afford to work together, find common ground, or compromise. Neither major party wants to acknowledge that it only represents about half the voting block of United States citizens. The fact that half the nation has a different political perspective should create an imperative to work together, but instead, it has created an almost maniacal drive to push through policies as fast and as hard as they can, while they can.

Frankly, it’s like two toddlers fighting over the same toy.

And it’s time for the adults to step in. It’s up to us.

Yes, it’s us, the folks who believe in free speech, ethics, rule of law, persuasion rather than force, and principles to do what’s RIGHT instead of “fighting back” using the same vengeful corrupt, obstinate, degenerative tactics that have characterized our political world for far too long.

Yes, it’s hard to realize that change has to come from us. It’s not “fair” because the “other side” won’t play fair along with us. At least not until we change not just the conversation, but how the conversation is conducted.

And it’s going to have come at the person-to-person level. It matters how you directly engage with your neighbors, have conversations with your work colleagues, and respond on social media.

Here are a few ideas to consider that will help us move from divisiveness back to civil discourse, which is the only constructive, controllable and correct way to enact real change.

This is a technique that feels virtuous at first glance, but it has several key flaws if you are trying to change minds or make progress. First, it keeps us stuck in the past and in a rehashing mindset. This is seldom productive, beyond identifying a commonly shared problem that perhaps both need fixed.

Second, it asks the person you are trying to convince to take a big step in admitting “fault” – which can often be too big of an ask. So, you are setting up the conversation to go back and forth between finding equivalency of examples of bad behavior, rather than trying to find forward-looking examples for good behavior.

Think of a marriage or partnership. Any time you see your spouse or partner as the “enemy” or start to name-call each other, you know that marriage or relationship is in trouble. Respect, civility and self-control have gone out the window. Therapists will tell you, unless you can get back to respecting each other as individuals, the relationship is doomed.

Like it or not, we have millions of fellow citizens –individuals– in our country who do not share our general political views. In fact, there probably isn’t one single person in this country who shares every single political view that you have!

So if we continue to think of our fellow citizens who have different political views as the “enemy,” we cannot persuade them to open their minds and think differently. The enemy is someone we hate, someone we subjugate, someone we disrespect, someone we marginalize, someone we force. It’s not civilized, respectful or productive. And it’s what has caused the divisiveness and damage to our freedoms that we see today.

To stay in persuasion mode, take a moment to reverse the conditions of the argument in your own mind. Would you feel the same way if the conditions were reversed?

For example, has your mind ever been changed when someone called you a name? Did that open up your mind to their way of thinking? Did you ever think to yourself, “Oh gee, that person thinks I’m stupid, I’d better listen to them”? Probably not!

Consistency in principle is KEY to civil discourse and change. 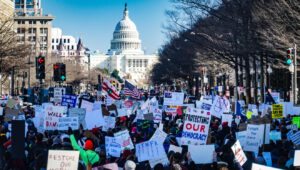 Divisiveness isn’t what happens only when you and your views are being dismissed or targeted.

We must find that common ground, that place where we can empathize and relate to core concerns or values. And from that place, we can start to work together to create solutions to our common problems that protect our rights and our freedoms, rather than relegating our government to this high-stakes push-pull between the political extremes.

It may not seem fair, especially when the other side continues to ambush with name-calling and other divisive tactics. It may be an uphill battle. But if our principles are right and just —and they are— then we must be willing to put them into action at all times, even when others do not.

Gandhi also said: “Happiness comes when what you think, what you say, and what you do are in harmony.” Our political happiness as a nation depends on our creating this alignment first within ourselves; then with our neighbors, families and colleagues; and then with those all around us. If we truly want unity and tolerance, we must practice it ourselves.

As always, your thoughtful opinions are welcomed in the spirit of civil discourse. 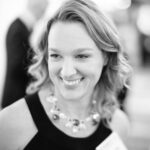 Valerie Durham is the Executive Director of FreedomFest, and holds an MFA in Dance.

Previous StoryMissing the Forest for the Trees
Next Story3LP: To Live and Let Live… and Thrive!